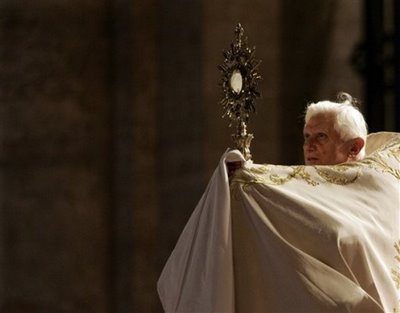 Benediction of the Blessed Sacrament
offered by the Vicar of Christ Pope Benedict XVI
Benediction of the Blessed Sacrament is one of the most beautiful devotions of the Catholic Church. I wish that this devotion would become popular again on Sunday evenings. What a beautiful way to complete the Lord’s Day.
Some readers here are not Catholic, so let us briefly explain what is meant by Benediction of the Blessed Sacrament.
The Latin word benedictio is formed by two words: bene (well) and dictio (speaking). To speak well over something. In English, we translate benedictio word as “blessing.” By the way, a malediction is a “bad speaking” or a curse.
In the Catholic Church, there is a tradition that Christ made the blessing of the sign of the cross over the Immaculate Mary and the Holy Apostles just before He ascended into Heaven. After the Ascension, the Holy Apostles as priests of the New Law would also make the sign of the cross over the faithful in imitation of the Divine Savior. The hands of the Apostles, and thus the hands of all bishops and priests are consecrated so that they might bless and sanctify people and things. For example, at the end of every Holy Mass, the priest makes the sign of the cross with his hand over the people to bless them in the name of the Triune God. A priest does the same when he absolves sinners in Penance at the absolution in the name of the Triune God.
Now the Benediction of the Blessed Sacrament is different from a normal priestly blessing. The priest  in Benediction does not bless the people. Rather the priest holds the Blessed Sacrament Who is the Lord Jesus Christ, and Christ Himself directly blesses the people. Again, it is not the priest who blesses in the person of Christ, but Christ Himself that blesses. In order to signify that he is not blessing the people, the priest covers his hands with a humeral veil which drapes over his shoulders and covers his hands (humurus means “shoulder” so a humeral veil is a “should veil”). The old Cæremoniale Romanum prescribes that the humeral veil should be fashioned from silk.
Clearly, the hands of the priest are not unworthy to touch the Body of Christ or even the golden monstrance which bears Him. The venerable hands of the priest, after all, hold the consecrated Body of Christ in the canon of the Holy Sacrifice of the Mass.
I once was confused about the use of the humeral veil in Benediction of the Blessed Sacrament. I had assumed that the priest wore the humeral veil so as not to touch the monstrance on account of its sanctity in connection with the Holy Eucharist. However, this assumption caused me confusion since the priest clearly touches the monstrance with his bare hands at the beginning and end of the Benediction service.
Below is a video of a priest preparing for Benediction. Notice how the priest places the immaculate Body of Christ the King into the golden monstrance. Notice also that the priest touches the golden monstrance with his holy and venerable hands.
Now here is a video of the actual Benediction of the Blessed Sacrament. Notice that the priest has veiled his hands with the humeral veil in order to reveal that it is Christ alone giving the blessing to the people assembled.
The humeral veil is also used in Solemn High Mass by the subdeacon in order to hide the paten. The humeral veil has its origins in the Jewish prayer veil used by Jewish men and undoubtedly worn by Christ  our High Priest and His Holy Apostles.

If you are interested in the relationship of Catholic vestments to the vestments of the Old Testament, please see chapter six of my book The Crucified Rabbi: Judaism and the Origins of Catholic Christianity

The inheritor of a tradition of Catholic monarchy dating back...
01:03:40

VIGANÒ on CHURCH vs. Anti-CHURCH with Matt Gaspers and Dr. Taylor Marshall

Archbishop Carlo Maria Viganò has increased his attention to our...
34:03