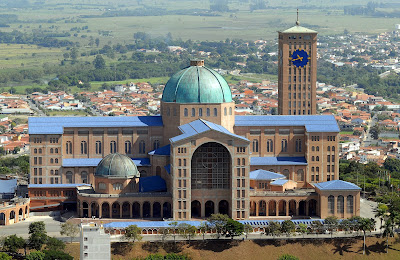 A tradition claims that the statue had been sculpted by Fra Agostino de Jesus, a friar from São Paulo known for his artistic skills in making sacred images. This would date the statue to about 1650. Somehow between 1650 and 1717, the statue was submerged under water in the Paraíba River. Who knows how or why.

In 1737, a Catholic priest of Guaratinguetá built her a chapel on the Coqueiros hill to house the little statue. In 1904, to commemorate the fiftieth anniversary of the proclamation of the dogma of the Immaculate Conception, the statue of Our Lady of Aparecida was crowned by the archbishop of São Paulo, Dom Lino Deodato Rodrigues, at the decree of the Holy See and in the presence of the Apostolic Nuncio. The Coronation was performed in the Name and on behalf of Pope Saint Pius X.
The Pontifical Coronation of the statue of Aparecida was a major social event attended by pilgrims and also by several civil authorities, including the then President of the Republic, Rodrigues Alves, who witnessed the act in spite of the separation of Church and State that had been instituted less than twenty years before, when Brazil became a Republic.
The golden crown for the statue had been donated by the exiled Brazilian Princess Isabel.
The new Basilica was initiated in 1955. It is the largest Marian shrine in the world and the second largest Basilica in the world, second only to St. Peter’s in the Vatican City. As of 2011, it enjoys the status as the greatest Marian pilgrimage in the world, ranking above Our Lady of Guadalupe and Our Lady of Lourdes in the number of pilgrims.

Feast Day: October 12 – the day on which the fishermen found the little clay statue of Our Lady of Aparecida.

Our Lady of Aparecida, pray for us.


Do you enjoy reading Canterbury Tales by Taylor Marshall? Make it easier to receive daily posts. It’s free. Please click here to sign up by Feed or here to sign up by Email. Please also explore Taylor’s books about Catholicism at amazon.com.