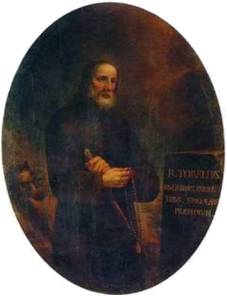 When my wife was pregnant with our most recent baby, I mentioned some concerns she was having and he told, “Just have her drink some Saint Torelli water. That’s what it’s there for.” This was my first introduction to Saint Torelli’s Water.

Some Catholic parishes offer Saint Torelli’s Water as a sacramental help for pregnant women and as a remedy against illness.

The water is named after Blessed Torellus of Poppi. Torellus was born in Poppi, Tuscany, Italy, in 1201 and he died 1281. Public veneration of Torellus was confirmed by Benedict XIV. His feast day is March 16.
Torellus was a dissolute youth. Once, when he was playing a game with friends, a cock flew onto his arm and crowed three times. Seeing this incident as a sign from God, Torellus hastened to a nearby monastery to confess his sins.
After repenting he received the habit of a recluse from the Vallumbrosan abbot of San Fedele. He lived as an austere recluse, walled up in his cell near Poppi, for sixty years.
Once, as a mother was washing clothes, with her three-year-old son beside her, a wolf seized the boy in its jaws and ran off. Screaming, the mother rushed after the animal. The wolf then stumbled into Torellus’ cell. Instantly the hermit commanded the beast by the authority of God to put down the boy. The wolf thereupon laid the child at Torellus’ feet. Torellus then commanded the wolf never to attack anyone again. The hermit now prayed over the nearly lifeless boy. When the frantic mother reached Torellus’ cell, she found her son safe and sound.

On another occasion, a mother with two gravely ill sons threw herself at Torellus’ feet, begging him to intercede for them. Torellus prayed: “My omnipotent Lord…succor these boys; mend, O Lord, the sorrow of their afflicted mother, and by reason of her faith, console her grief, and deliver her sons.”

Both boys were healed.

This is a great devotion for pregnant mothers. If your parish doesn’t have any Torelli water, ask your priest to make some for you.

BLESSING OF WATER FOR THE SICK
IN HONOR OF THE B.V.M. AND ST. TORELLUS
(By a Brief dated December 16, 1628)
P: Our help is in the name of the Lord.
All: Who made heaven and earth.
P: The Lord be with you.
All: And with your spirit.
Let us pray.
God, who in your heavenly mercy keep harmful things from man, giving him only the things that are for his good; who at the pool of Probatica moved the waters by the hand of your angel, thus destroying sickness and conferring health; pour out the dew of your blessing + on this water, so that all the sick who drink it may, by the merits and prayers of the blessed Virgin Mary and the holy confessor, Torellus, regain their health. May women who are with child be spared every dire misfortune, and have the happiness of bringing their offspring to the grace of holy baptism; through Christ our Lord. Amen.
The water is sprinkled with holy water.
Comment | Share | Tweet | Buffer | print | email