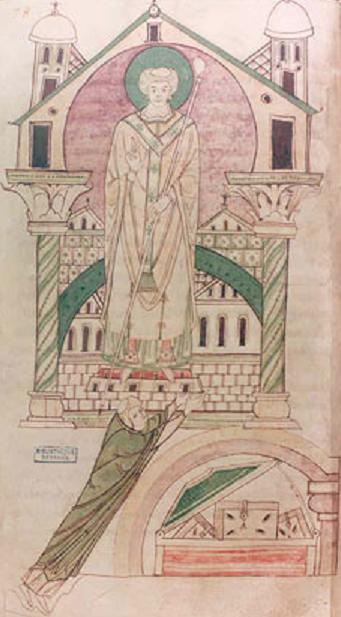 Saint Wulfran of Sens
March 20 remembers a great saint, Wulfran, who challenged the European practice of human sacrifice – adult sacrifice and infanticide. We of European descent do well to remember that our ancestors were idolators and sacrificed children. It was the Catholic Church that delivered us from this savagery.
Saint Wulfran baptized great multitudes, with a son of King Radbod, and drew the people from the barbarous custom of sacrificing men to idols. The lot herein decided, on great festivals, who should be the victim; and the person was instantly hanged or cut in pieces. The lot having fallen on one Ovon, St. Wulfran earnestly begged his life of King Radbod; but the people ran tumultuously to the palace, and would not suffer what they called a sacrilege. After many words, they consented that if the God of Wulfran should save Ovon’s life, he should ever serve him, and be Wulfran’s slave. The saint betook himself to prayer, and the man, after hanging on the gibbet two hours, being left for dead, by the cord breaking fell to the ground; and being found alive was given to the saint, and became a monk and priest at Fontenelle.
Wulfran also miraculously rescued two children from being drowned in the sea, in honor of the idols. Radbod, who had been an eye-witness to this last miracle, promised to become a Christian, and was instructed among the catechumens; but his criminal delays rendered him unworthy such a mercy. As he was going to step into the baptismal font, he asked where the great number of his ancestors and nobles were in the next world? The saint replied, that hell is the portion of all who die guilty of idolatry. At which the prince drew back, and refused to be baptized, saying, he would go with the greater number.
This tyrant sent afterwards to St. Willebrord to treat with him about his conversion; but before the arrival of the saint was found dead. St. Wulfran retired to Fontenelle, that he might prepare himself for death, and died there on the 20th of April, in 720.
– From Butler’s Lives.
Do you enjoy reading Canterbury Tales by Taylor Marshall? Make it easier to receive daily posts. It’s free. Please click here to sign up by Feed or here to sign up by Email. Please also explore Taylor’s books about Catholicism at amazon.com.
Comment | Share | Tweet | Buffer | print | email