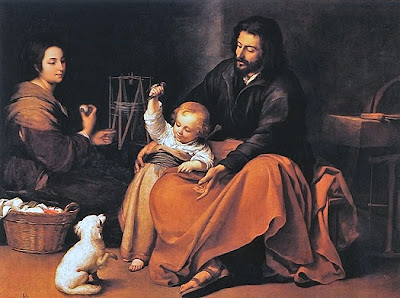 Saint Joseph is the Patron of the Universal Church. According to Catholic theologians, Saint Joseph’s ministry is above all other human and angelic ministries. The reason for this is that Saint Joseph belongs to the Order of the Hypostatic Union predestined by God for the Incarnation of Christ. In Greek, the word for the divine Person of of Christ is hypostasis, and the Order of the Hypostatic Union refers to the way in which the divine Person of the Word assumed human nature.
The Order of the Hypostatic Union refers to those three person who belong to this ineffable mystery: the Incarnate Christ, Mary the Immaculate Conception, and Saint Joseph the Husband of Mary and Guardian of Christ. The Holy Family is the Order of the Hypostatic Union.
In order for the union of the divine nature and human nature (without mixture or commingling) in the divine person of Christ to occur, the Word was made flesh. God therefore predestined that Christ would be born of a human mother. Hence, Mary is part of the Order of the Hypostatic Union in a special way. However, this was not enough. In order to protect the Holy Mother and Christ Child, and also to glorify the dignity of marriage, God predestined that Christ would be born in wedlock and be the Son within a true human family. God therefore predestined St Joseph to be an intimate part of the hypostatic union. The Incarnate Word ate food because Saint Joseph worked. The Incarnate Word was protected from Herod, because Saint Joseph guarded him.
Saint Thomas Aquinas teaches that orders of ministries (either angelic or human) excel in proportion to their proximity to God (Summa theologiae I, q. 107, a. 6). Saint Joseph’s ministry and order, then, was higher than the ministry of the angels. Saint Joseph’s ministry, like that of Mary, is higher even than those of popes, bishops, and priests. This why traditional Catholic Church’s have altars to Mary and Joseph as testimonies to this truth. Mary and Joseph, with Christ, stand above all the orders and ministries of the supernatural order.
Francisco Suarez teaches that the ministry of Saint Joseph “surpasses all others because it exists in a superior order.” (Suarez, Tom II, disp. 8, sec. 1). Saint Francis de Sales holds to the same teaching. Moreover, all the theologians that compare the Holy Trinity to the order of the Holy Family confirm that the three persons of Holy Family belong to an order and ministry above all others. We receive grace chiefly because Christ was made man and this mystery was facilitated in God’s plan through the wills and operations of Joseph and Mary.
The prayers of the great Mother of God and Saint Joseph are the most powerful and efficacious because these two human persons are closest and most beloved by our Lord Jesus Christ – by grace they made His Incarnation possible. Even more, it is fruitful to contemplate that Christ our Lord and the Immaculate Virgin Mary were submitted to Saint Joseph who served as the Head of the Holy Family. Oh the humility of Christ!
Saint Joseph, pray for us.
PS: Are you interested in learning more about how Saint Joseph is the pattern for authentic Catholic fatherhood? On March 19 at 7pm, I’ll be presenting a public lecture on Saint Joseph’s Purity and Virtue as they relate to the mystery of the Order of the Hypostatic Union at the College of Saint Thomas More in Fort Worth.
Please feel free to join us if you live in the Dallas/Fort Worth metro area. Here are the directions to the College of Saint Thomas More.
Do you enjoy reading Canterbury Tales by Taylor Marshall? Make it easier to receive daily posts. It’s free. Please click here to sign up by Feed or here to sign up by Email. Please also explore Taylor’s books about Catholicism at amazon.com.
Comment | Share | Tweet | Buffer | print | email