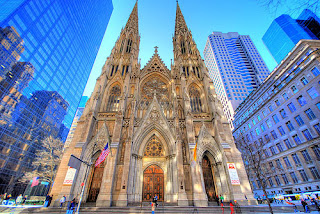 As Catholics, we believe the principle of Saint Thomas Aquinas that grace perfects, heals, and elevates nature. The Catholic Church is the divinely appointed institution that gives the grace of Christ to the world. The State is a natural institution for the natural well-being of human society. The Church, then, should perfect the State just as grace perfects nature.
So then, what if we Catholics lived holy lives and lovingly evangelized as we should? What would the United States look like?

Americans, conditioned by our history, are very concerned about “our rights.” So before looking at what a Catholic America might look like, let us establish that all human rights are given to us by the Creator. As our Declaration of Independence rightly explains: “they are endowed by their Creator with certain unalienable Rights.”

Human rights, then, are not arbitrary but conform to what God has given and allowed. The right to life is one such right. Freedom of speech is a right, but it is limited so as to exclude blasphemy of God. God does not give us a “right” to acts which are contrary to His nature. He gives us a free will and we can sin with it, but He does not give us the protected “right” to sin. Nobody on Judgment Day will protest, “But I had the RIGHT to curse you and commit mortal sins!”

With all this mind, what if America were a fully Catholic country, here is what it might look like…
This is what I’m praying for and this is what I’m working for. Not by force, but by patience, penance, and kindness. As Saint Paul wrote:

Do you not know that God’s kindness is meant to lead you to repentance?” (Romans 2:4)

It’s not enough to be on defense. It’s not enough to “fix” the HHS debacle. It’s not even enough to overturn Roe v. Wade. We have to be like the early Christians. We have to think like Saint Paul who wanted to convert not only individual souls but the entire Roman Empire. As the Apostle once wrote: “To re-establish all things in Christ!” (Eph1:10), which much later became the motto of Pope Saint Pius X: Instaurare omnia in Christo!

1) This sounds medieval? Why go back?
Well, it’s not nostalgia for the past. In fact, it is looking to the future. It’s a desire to see Christ the King recognized for what He truly is “King of Kings and Lord of Lords.” To think that a nation can be “not religious” is perhaps a case of modern naiveté.
2) How is this different than Sharia Law of the Mohammadans?
The difference is that the Church is distinct from the State. Islam does not have a concept of Church, but only the State. Moreover, Catholicism is the true religion and is most suited human flourishing. Islam is a false religion which does not embrace human dignity or recognize the goal of humanity in the Beatific Vision. Since Islam is based on a “master/slave” arrangement and not a “father/son” arrangement, it is politically dangerous and threatens the dignity of persons.
3) But what about separation of Church and State?
We must also affirm the public teaching of Pope Blessed Pius IX who condemned the separation of the Church from the State.  Pope Blessed Pius IX taught that the following statement as an error and contrary to the Catholic Faith:

CONDEMNED: “The Church ought to be separated from the State, and the State from the Church.” Syllabus of Errors, 55.