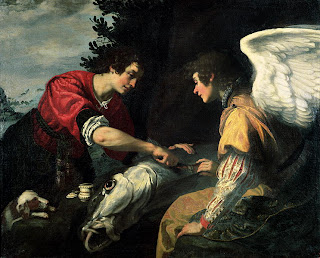 Tobias and St Raphael the Archangel
Mark Shea has recently defended his position that the biblical book of Tobit is fiction, nevertheless inspired fiction and worthy of being included in the canon of Sacred Scripture.
Describing Tobit as historical fiction is a common way for modern Catholics to defend the canonicity of Tobit against Protestant naysayers. The book of Tobit, they grant, has so many factual errors and ridiculous accounts (blindness from bird feces in the eyes) that the story cannot possibly be historically true. Protestants have made this argument for 500 years.

These well-meaning Catholics claim that Tobit is inspired fiction just as Christ’s parables are inspired fiction. In fact, they claim that both Tobit and Judith (and sometimes Jonah) contain so many obvious historical errors that the errors were placed there by God in order to tip off the reader to the books’ fictional quality.
There is one problem with this kind of defense regarding “Tobit as inspired fiction.” The Church Fathers did not believe in the fictional nature of the book of Tobit. They believed and taught that Tobit was historical person and that the book bearing his name told a true and historical story.
St. Polycarp, St. Clement of Alexandria, Origen, St. Athanasius, St. Cyprian, St Ephrem, St. Ambrose, and St. Augustine refer to the characters and narrative of Tobit as historical. As late as 1822, the Holy See had a book put on the Index of Forbidden Books because it asserted by the book of Tobit was not historical but poetical (the book was Joahnn Jahn’s Introductio in libros sacros).
Did St Augustine or even St Thomas Aquinas miss something important when they taught that Tobit was historical and factual? Whenever I am asked to side with someone against both Augustine and Thomas Aquinas, I get a bit nervous. In fact, it is a pretty safe rule of thumb to always side against a position when both Augustine and Thomas agree with the opposite position. Moreover, the Pontifical Biblical Commision decreed that we are to hold the historical books of Scripture historically (Biblical Commission, June 23, 1905)…and Tobit is a historical book.
It is the historical consensus of the Catholic Church that Tobit is not only inspired and inerrant, but that it is also historical. Nevertheless, there had better be some pretty good reasons for defending the historicity of Tobit. Granted, there are some problems. I’ll cite the old Catholic Encyclopedia on this subject of historical problems and then their common answers as they address them much more precisely than I can.
A word of warning: the manuscript tradition of Tobit is messy with the Vulgate, Old Latin, Aramaic, Alexandrian, Vatican, Sinaticus texts having similarities and variations.
Below, A refers to the text of the Alexandrian codex (fifth century), and B refers to Vatican codex (fourth century) of the Greek Septuagint; Aleph or A alone refers to Codex Sinaticus (fourth century) of the Septuagint.
I also read the defense by Cornelius a Lapide for the historicity of Tobit. It is quite convincing. It’s available online in Latin. Regrettably, I don’t have the time to reproduce it all in English.
I would like to close by saying that there is a place for inspired fiction. Christ our Lord’s parable of seeds and the soil or His parable about the lost coin are in fact inspired fiction.

I think we draw the line, however, when books that present themselves as inspired history are taken as inspired fiction. The parables of Christ are generic stories (“A man did such an such”, “A woman…”, “A Samaritan…”, or “A king…”). However, Tobit is specific and lists historical times and places. To interpret Tobit as inspired fiction seems to fall out of line with Pope Pius XII’s Divino Afflante Spiritu which holds that we study Scripture mindful of the genre of a book. Tobit, by all accounts, is a historical book.

No offense toward Mark Shea nor to his good work, blog posts, and helpful writings; however, the consensus of the Church Fathers and Thomas Aquinas regarding the nature of Tobit have great merit and a long legacy.