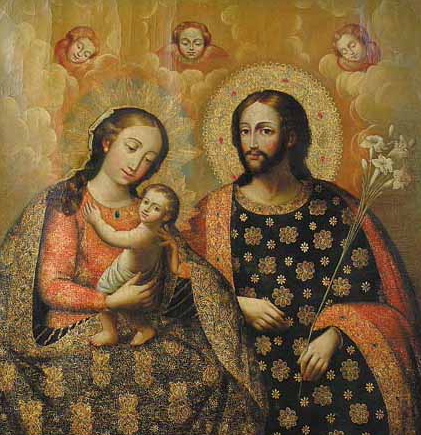 Saint Joseph and the Blessed Virgin Mary were certainly sacramentally married. To say that Christ was born of an “unwed mother” is incorrect. Christ was born into holy wedlock – the most holy marriage in the history of humanity.
Last week, we examined how Saint Joseph belongs to the Order of the Hypostatic Union. This week, we examine why Joseph belongs to the order of Incarnation and why it was fitting for Mary to be married to Saint Joseph.
Saint Thomas Aquinas, gives us 12 reasons for the fittingness of their bond in holy matrimony. One of the most important was in order that the pregnant Mother of God would not be stoned under the law of Moses.
The first four reasons are for Christ’s sake. The next three are for the sake of the Mother of God. The last five are for our sake.
It was fitting that Christ should be born of an espoused virgin:
1) First, for His own sake; secondly, for His Mother’s sake; thirdly, for our sake. For the sake of Christ Himself, for four reasons. First, lest He should be rejected by unbelievers as illegitimate: wherefore Ambrose says on Luke 1:26-27: “How could we blame Herod or the Jews if they seem to persecute one who was born of adultery?”
2) Secondly, in order that in the customary way His genealogy might be traced through the male line. Thus Ambrose says on Luke 3:23: “He Who came into the world, according to the custom of the world had to be enrolled Now for this purpose, it is the men that are required, because they represent the family in the senate and other courts. The custom of the Scriptures, too, shows that the ancestry of the men is always traced out.”
3) Thirdly, for the safety of the new-born Child: lest the devil should plot serious hurt against Him. Hence Ignatius says that she was espoused “that the manner of His Birth might be hidden from the devil.”
4) Fourthly, that He might be fostered by Joseph: who is therefore called His “father,” as bread-winner.
It was also fitting for the sake of the Virgin:
5) First, because thus she was rendered exempt from punishment; that is, “lest she should be stoned by the Jews as an adulteress,” as Jerome says.
6) Secondly, that thus she might be safeguarded from ill fame. Whence Ambrose says on Luke 1:26-27: “She was espoused lest she be wounded by the ill-fame of violated virginity, in whom the pregnant womb would betoken corruption.”
7) Thirdly, that, as Jerome says, Joseph might administer to her wants.
This was fitting, again, for our sake:
8) First, because Joseph is thus a witness to Christ’s being born of a virgin. Wherefore Ambrose says: “Her husband is the more trustworthy witness of her purity, in that he would deplore the dishonor, and avenge the disgrace, were it not that he acknowledged the mystery.”
9) Secondly, because thereby the very words of the Virgin are rendered more credible by which she asserted her virginity. Thus Ambrose says: “Belief in Mary’s words is strengthened, the motive for a lie is removed. If she had not been espoused when pregnant, she would seem to have wished to hide her sin by a lie: being espoused, she had no motive for lying, since a woman’s pregnancy is the reward of marriage and gives grace to the nuptial bond.” These two reasons add strength to our faith.
10) Thirdly, that all excuse be removed from those virgins who, through want of caution, fall into dishonor. Hence Ambrose says: “It was not becoming that virgins should expose themselves to evil report, and cover themselves with the excuse that the Mother of the Lord had also been oppressed by ill-fame.”
11) Fourthly, because by this the universal Church is typified, which is a virgin and yet is espoused to one Man, Christ, as Augustine says (De Sanct. Virg. xii).
12) A fifth reason may be added: since the Mother of the Lord being both espoused and a virgin, both virginity and wedlock are honored in her person, in contradiction to those heretics who disparaged one or the other.
Comment | Share | Tweet | Buffer | print | email