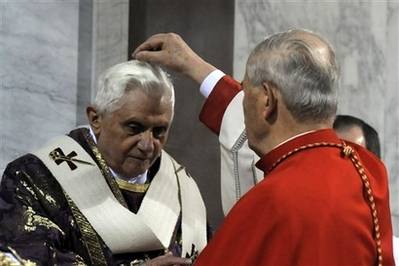 Pope Benedict Receiving Penitential Ashes
In the United States pregnant women, nursing women, people over 60 and children under 18 are not obligated to fast (eat only one full meal) on Ash Wednesday and Good Friday. However, all Fridays of Lent are days of abstinence (no meat) for those 14 and older.
Here’s what the current Code of Canon Law says:

Can. 1250 The penitential days and times in the universal Church are every Friday of the whole year and the season of Lent.
Can. 1251 Abstinence from meat, or from some other food as determined by the Episcopal Conference [for Americans, this refers to the United States Conference of Catholic Bishops], is to be observed on all Fridays, unless a solemnity should fall on a Friday. Abstinence [not eating meat] and fasting [not eating food – see clarification below] are to be observed on Ash Wednesday and Good Friday.
Can. 1252 The law of abstinence binds those who have completed their fourteenth year [translation: no meat for those fourteen and up]. The law of fasting binds those who have attained their majority [18], until the beginning of their sixtieth year. Pastors of souls and parents are to ensure that even those who by reason of their age are not bound by the law of fasting and abstinence, are taught the true meaning of penance.
Can. 1253 The conference of bishops can determine more precisely the observance of fast and abstinence as well as substitute other forms of penance, especially works of charity and exercises of piety, in whole or in part, for abstinence and fast.