The office of consecrated virgins and women goes back to the Israelites of the Old Testament. I documented this claim last month in: 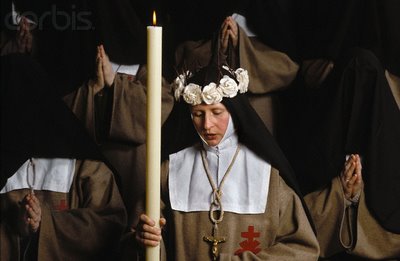 We find that consecrated women date to the first ages of the New Testament. Saint Paul praises of special virgins for their continence and their devotion to the things of the Lord (1 Cor 7).

A sign, then, of the true, biblical Church is the presence of these consecrated women. By the way, these are not female priests or married women. They are definitely either virgins or widows. The word “nun” by the way, comes from the Latin nonna – a term of endearment for a grandmother. It is directly related to the English Nana. The consecrated widows, then, bore the title of grandmotherly endearment.

Virgins vowed themselves to the service of God primarily through prayer. These ancient nuns first lived with their families, but by the third century, they assembled at community convents then called partheuones. After Constantine, these consecrated virgins and women were at liberty to have organized communities and protection from aggression and harm.

Before closing, the veil was the sign of the consecrated. This goes back as far as Tertullian (and probably all the way back to Saint Paul). The veil is the sign that these women belong irrevocably to Christ.

Let us pray a short prayer today asking Christ to give the Church more flowers, that is, more holy women, to bring beauty and sanctity to our Church.