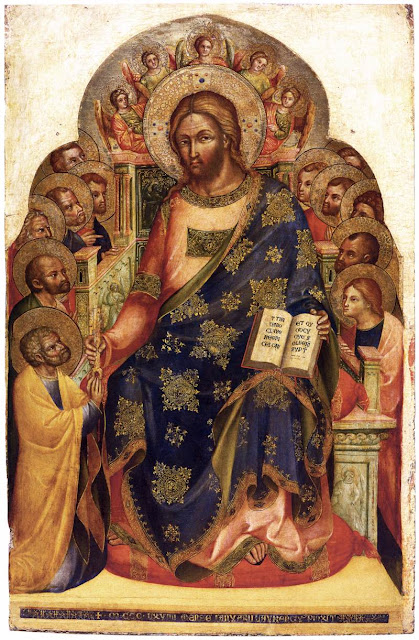 Christ giving the Keys to Saint Peter
Catholic Tradition holds that Saint Peter arrived in Rome for the first time in about AD 44. This coincides with the martyrdom of St James the Greater and St Peter’s arrest in Jerusalem and subsequent departure:

“But he, beckoning to them with his hand to hold their peace, told how the Lord had brought him out of prison. And he said: Tell these things to James and to the brethren. And going out, he went into another place.” (Acts 12:17, D-R)

Here, Peter departure to “another place,” is his departure from Jerusalem to Rome. After the imprisonment and attempted murder of Peter, the Apostle’s location throughout the New Testament is kept secret and hidden.
Saint Peter established the Church in Rome from AD 43 till AD 49 when he and all Jews were expelled from Rome by the decree of Claudius in AD 49. Why were they expelled?
According to Roman historians the Jews were expelled from the city of Rome in AD 49 because the Roman Jews were fighting over a Jew named “Chrestus.”
Hmmm…Jews in Rome fighting over “Chrestus”…there must have been a mighty preacher (Pope) of “Chrestus” or “Christ” in Rome in the AD 40s to lead to all that infighting within the synagogues! This has Peter’s fingerprints all over it.
Also remember that Saint Peter pops back into Jerusalem from “another place” in AD 49, which is the occasion for the Apostolic Council in Acts 15 regarding circumcision and baptism.
From AD 49 till AD 54 (during the Jewish expulsion from Rome), we find Saint Peter reigning temporarily in Antioch. This is why Peter is known also as the first bishop of Antioch. It was the first “Babylonian captivity” of the Pope.
Tradition holds that in AD 54, when Nero revoked the Jewish expulsion from Rome, Saint Peter moved back to Rome and continued to reign as the first Pope of the Apostolic See.
In my upcoming book The Eternal City: Rome and the Origins of Catholicism I will present a theory that Saint Paul cryptically refers to St Peter in Rome in the book of Romans:

“And I have so preached this Gospel, not where Christ was named, lest I should build upon another man a foundation.” (Romans 15:20, D-R)

The Greek is μὴ ἐπʼ ἀλλότριον θεμέλιον οἰκοδομῶ.
Here “another man” is Saint Peter as the Catholics of Rome would know. What other man (singular) had built a foundation for the Church in Rome? Paul had not yet preached there because “another man” was laying the “foundation” of the Church in Rome, Saint Peter.
The chronology is so tight and conforms to what we know from secular history, and yet modern “experts” deny it all – even that Peter came to Rome.
I’ve spoken before on how some Catholics have unwittingly adopted the hermeneutic of suspicion, which immediately holds all things traditional as suspect until proven. They love to boast about how George, Christopher, and Philomena aren’t really saints, that the Evangelists didn’t really write the Four Gospels, and that pious people in the old days simply fingered Rosaries and didn’t understand the Mass. These are signs of the hermeneutic of suspicion. Contrary to this, the Holy Father Pope Benedict has asked to employ a hermeneutic of continuity. We are not allowed to stand in judgment over the previous tradition. We receive it.
The hermeneutic of suspicion is a fault against the Fourth Commandment that teaches “Honor thy Father and Mother.” At the end of the day, are you going to trust the Doctors and Saints or enlightened Hegelians or a German text critics on these matters?
ad Jesum per Mariam,
Taylor
Do you enjoy reading Canterbury Tales by Taylor Marshall? Make it easier to receive daily posts. It’s free. Please click here to sign up by Feed or here to sign up by Email. Please also browse Taylor’s books about Catholicism at amazon.com by clicking here.
Comment | Share | Tweet | Buffer | print | email