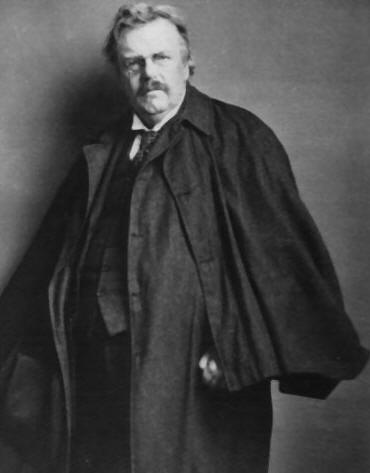 After blogging for a few years, I have learned to ignore the trolls who drop spiteful comments or who surf the Catholic web looking for a fight. About once or twice per year, however, I will encounter someone who is brilliant but crazy. The first sign is that such a person is usually well spoken and well planned. They are usually well read. However, the rapidity of the argument goes so quickly and is so scattered that you cannot keep up with him. Sometimes these madmen are Protestant. Sometimes they are Catholic. Often times they are sedevacantists.
I was recently reminded of this excellent advice from GK Chesterton regarding “how to argue with a madman.” This passage is quintessentially Cherstertonian – witty, concise, and precise:

If you argue with a madman, it is extremely probable that you will get the worst of it; for in many ways his mind moves all the quicker for not being delayed by the things that go with good judgment. He is not hampered by a sense of humor or by charity, or by the dumb certainties of experience. He is the more logical for losing sane affections. Indeed, the common phrase for insanity is in this respect a misleading one. The madman is not the man who has lost his reason. The madman is the man who has lost everything except his reason.

The madman’s explanation of a thing is always complete, and often in a purely rational sense, satisfactory. Or, to speak more strictly, the insane explanation, if not conclusive, is at least unanswerable; this may be observed specially in the two or three commonest kinds of madness.

If a man says (for instance) that men have a conspiracy against him, you cannot dispute it except by saying that all the men deny that they are conspirators; which is exactly what conspirators would do. His explanation covers the facts as much as yours. Or if a man says that he is the rightful King of England, it is no complete answer to say that the existing authorities call him mad; for if he were King of England that be the wisest thing for the existing authorities to do. Or if a man says that he is Jesus Christ, it is no answer to tell him that the world denies his divinity; for the world denied Christ’s…

…If we could express our deepest feelings of protest and appeal against this obsession, I suppose we should say something like this: “Oh, I admit that you have your case and have it by heart, and that many things do fit into other things as you say. I admit that your explanation explains a great deal; but what a great deal it leaves out! Are there no other stories in the world except yours; and are all men busy with your business? Suppose we grant the details; perhaps when the man in the street did not seem to see you it was only his cunning; perhaps when the policeman asked you your name it was only because he knew it already. But how much happier you would be if you only knew that these people cared nothing about you! How much larger your life would be if your self could become smaller in it; if you could really look at other men with common curiosity and pleasure; if you could see them walking as they are in their sunny selfishness and their virile indifference! You would begin to be interested in them, because they were not interested in you. You would break out of this tiny and tawdry theatre in which your own little plot is always being played and you would find yourself under a freer sky, in a street full of splendid strangers.”

Curing a madman is not arguing with a philosopher; it is casting out a devil.

In sum, with the madman, you can not convince him to entere into the real world. You must enter is tilted universe and expose it as a fraud. It’s pretty dangerous, but so are exorcisms. Pray, fast, and proceed with caution with the internet crazies. I simply try to avoid them.
Do you enjoy reading Canterbury Tales by Taylor Marshall? Make it easier to receive daily posts. It’s free. Please click here to sign up by Feed or here to sign up by Email. Please also explore Taylor’s books about Catholicism at amazon.com.
Comment | Share | Tweet | Buffer | print | email