Those who have been raised Catholic may not be aware of the common objections that Protestants stack up against Catholics. One of the most potent is the argument that the Blessed Virgin Mary cannot be without sin because Saint Paul the Apostle wrote:

Doesn’t Saint Paul here say that all humans are guilty of sin? Why then do Catholics seem contradict Sacred Scripture and claim that Mary is exempted from Saint Paul’s inerrant and inspired words?

A good Benedictine monk recently wrote to me with the following:

Not having been Protestant, I never heard about St. Paul’s “all had sinned” as an argument against the Immaculate Conception. Hence, I wonder, how does one reconcile the two. I believe firmly in the Immaculate Conception, but I had never been directed to a Scripture quote that seems to refute it. I hate to ask so much of your time, but could you solve the dilemma for me? Thanks so very much!

That’s a great question that both Catholics and Protestants might be asking. Let’s begin by looking at the context. In the first half of his epistle to the Romans, Saint Paul is constructing an argument that Jews are not de facto saved by being Jewish. By the time Paul gets to chapter three of Romans, he has established that both Jews and Gentiles need Christ for salvation. Paul’s arguments are always leading toward Christ. Paul’s intent is to establish the universal need for Christ. Jews sin. Gentiles sin. Both groups need the Messiah in order to be saved.

Now the question regarding Romans 3:23 requires us to ask to whom does the “all” refer in “all have sinned.” All of humanity?

I cannot mean “all of humanity” since clearly Christ did not sin. Although Christ is a Divine person, he did have a human will and His human will did not sin.

So then, does Romans 3:23 refer to “all humans excepting Christ”? Not even this solution works because while infants are conceived with original sin, they do not commit personal sins until they reach the age of reason. Here Paul is not referring to original sin, but to the committal of personal sins.

So far, Paul’s statement proves to be conditional – it would exclude both Christ (of original sin and actual sin) and children (of only of personal sins). So then, since there are exceptions to the statement of Romans 3:23, we can assume another exception – the Blessed Virgin Mary would be excepted of both original sin and personal sins (and for that matter Jeremias, St John the Baptist, and St Joseph of personal sins, as well – but I’ve discussed that elsewhere).

Moreover, since the Apostle Paul makes the argument of Christ as the “New Adam” in Romans 5, we might assume that such an argument in Romans would presume the “New Eve” of the Blessed Virgin Mary. Paul does not address Mary here because his argument intends to convince Jews and Gentiles to live alongside each other in one Catholic Church in Rome – not two distinct “churches.”

So that’s the Catholic way of reconciling Romans 3:23 regarding the Immaculate Conception of Mary.

PS: You may have wondered why Saint Paul seems to say so little about the Blessed Virgin Mary. I examine this apparent silence (I say apparent) and I also describe Paul’s Mariology in my book: The Catholic Perspective on Paul. I think that it may contain the only contemporary Catholic presentation of Paul’s Mariology in the English language. 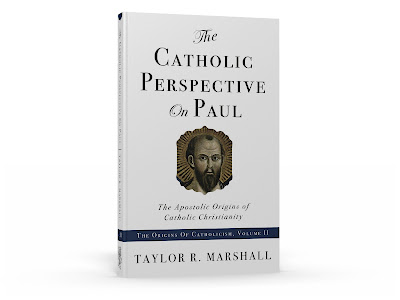