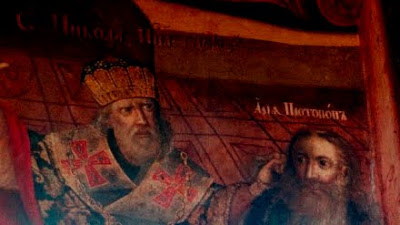 When President Teddy Roosevelt was a college student, he taught a Sunday School class for elementary school children. During this time, Roosevelt awarded a dollar to a boy in his Sunday School class for beating the snot out of a bully who tormented little girls. “You did exactly right,” said Roosevelt with pride. However, the congregation disagreed. They immediately dismissed Roosevelt for teaching the “un-Christian” principle of laying the smack down on those who have it coming to them.

Well, if tradition is true, that little boy was also richly rewarded by Jolly Old Saint Nicholas since the good Saint Nick allegedly “h-slapped” (“heretic slapped”) the heresiarch Arius. You see, Arius wrongly taught that Christ was not fully divine but rather a mere creature. Arius taught that Christ had been created by God the Father.

When the Emperor Constantine heard of this miracle, he immediately ordered that Nicholas be reinstated as a bishop in good standing for the Council of Nicea. Today we recite the Nicene Creed every Sunday so we know how the controversy played out. The bishops at Nicea sided with Saint Nicholas and Saint Athanasius and they condemned Arius as a heretic. To this very day, we still recite in the Creed that Christ is “God from God, Light from Light, True God from True God, begotten not made, consubstantial with the Father.” 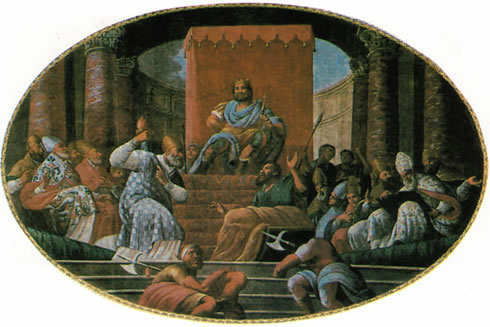