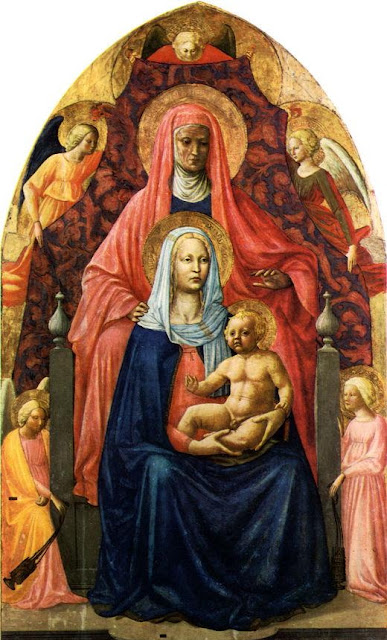 St Anne, St Mary, Christ our Lord
Today is the Solemnity of the Immaculate Conception of Mary – one of the most glorious days of the entire year. We celebrate that the Blessed Virgin Mary, by a singular privilege, was conceived in her mother Anne’s womb without original sin. From her first moment, she was filled with grace and made worthy to bear the only begotten Son of God.
Our Blessed Lady was the greatest creature every created by God. When God considered of the created universe, she was at the height. She is now higher than the Cherubim and Seraphim – only lower to her Uncreated and Divine Son. In the hierarchy of creation, Mary is at the pinnacle.
The difficulty, of course, is how Mary could be conceived without original sin, since Romans 5:12 seems to indicate a universal application of original sin to all without distinction. We have discussed how Christ is the Savior of Mary in a different post (see If Mary Had No Sin, Is Christ Still Her Savior?). Today, however, I want to focus on those four famous words that were used to defend the Immaculate Conception of Mary:
Potuit, decuit, ergo fecit!
“He could; it was fitting; therefore, He did it!”
The blood in my veins is almost entirely Irish, Scottish, and English and I am glad to say that this argument originated in these lands. It was Saint Eadmer of Canterbury (d. 1124),* I believe, who first uttered the “Potuit, decuit, ergo fecit” argument, and it was at Canterbury that we find some of the first articulated defenses of the Immaculate Conception. Of course, Blessed John Duns Scotus (“the Scot”) in the 14th century was also a stalwart defender of the Immaculate Conception and also used the “Potuit – decuit – ergo fecit” argument.
The argument is useful for the simple reason that it disarms opponents that deny the Immaculate Conception. It is still useful today in sharing your faith with Protestants.
Simply ask, “Could God make a person without original sin?” (potuit)
Next ask, “Would it have been decent or fitting for the Son of God to have his mother 100% pure and loyal to him?” (decuit)
Then follows the conclusion, “Well then, if He could doit and it was fitting, then He did do it. Mary was conceived immaculately (conceived without stain – macula is Latin for “stain”).
So “Potuit, decuit, ergo fecit!” Memorize these four Latin words and you will defend Our Lady with honor.
Dignare me laudare te, Virgo sacrata.