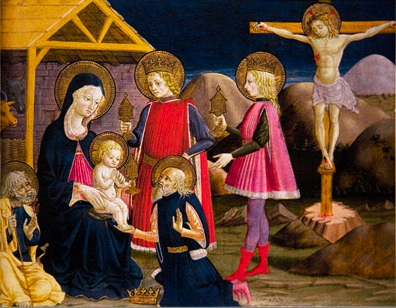 In a post earlier this week, we examined a biblical argument from the chronology of Saint Luke’s Gospel for identifying the birth of Christ our Lord in late December.
See: Was Jesus Really Born on December 25? Yes – A Biblical Argument for the Birth of Christ in Late December.
Today, let us take a look at the same subject from the perspective of Sacred Tradition.
The argument for Christ’s historical birth on December 25 has two parts. The first part relates to the Blessed Virgin Mary’s role in the Apostolic Tradition. The second part explores the the early Fathers regarding the date of Christ’s birth. By the way, I’m preparing another post that will briefly look at Pope Benedict XVI’s argument for the Divine Nativity having taken place on December 25. Look for that on Christmas Day.
Immaculate Mary: Mothers Never Forget
Ask any mother about the birth of her children. She will not only give you the date of the birth, but she will be able to rattle off the time, the location, the weather, the weight of the baby, he length of the baby, and a number of other details. I’m the father of six blessed children and while I sometimes forget these details (mea maxima culpa), my wife never does. You see, mothers never forget these details.
Now ask yourself this: Would the Blessed Virgin Mary ever forget the birth of her Son Jesus Christ who was conceived without human seed, proclaimed by angels, born in a miraculous way, and visited by Magi? She new from the moment of His divine Incarnation in her womb that He was the Son of God and Messiah. Would she ever forget that day?*
Next, ask yourself this: Would the Apostles be interested in hearing Mary tell the story? Of course! Do you think the holy Apostle who wrote, “And the Word was made flesh” was not interested in the minute details of His birth?
Whenever I walk around with our seven-month-old son, people always ask “How old is he?” or “When was he born?” Don’t you think people asked this question of Mary?
So the exact birthday (Dec 25) and the time (midnight) would have been known in the first century. Moreover, the Apostles would have asked about it and would have, no doubt, commemorated the blessed event that both Matthew and Luke chronicle for us.
We Americans have a federal holiday for Martin Luther King, Jr on January 16. We also celebrate the birthdays of George Washington and Abraham Lincoln. If Americans so regard the birthday of a man who ended racial segregation, would not the Apostles regard the birthday of Christ our Savior?
In summary, it is completely reasonable to state that the early Chistians both knew and commemorated the birth of Christ. Their source would have been His Immaculate Mother.
The Church Fathers Testify to December 25
In the previous post, we showed that Christmas could not have been a Christian attempt to replace a pagan holiday with a newly minted Christian holiday. Further testimony reveals that Catholics claimed December 25 as the Birthday of Christ prior to the conversion of Constantine and the Roman Empire.

Pope Saint Telesphorus (reigned A.D. 126-137) instituted the tradition of Midnight Mass on Christmas Eve. Although the Liber Pontificalis does not give us the date of Christmas, it assumes that Christmas was already being celebrated by the Pope and that a Mass at midnight was added. I don’t doubt the tradition at all.

“The First Advent of our Lord in the flesh occurred when He was born in Bethlehem, was December 25th, a Wednesday, while Augustus was in his forty-second year, which is five thousand and five hundred years  from Adam. He suffered in the thirty-third year, March 25th, Friday, the eighteenth year of Tiberius Caesar, while Rufus and Roubellion were Consuls.”

Also note in the quote above the special significance of March 25, which marks the death of Christ (March 25 was seen to correspond to the Hebrew month Nisan 14 – the traditional date of crucifixion).**
Christ, as the perfect man, was believed to have been conceived and died on the same day (March 25). In his Chronicon, Saint Hippolytus states that the earth was created on March 25, 5500 B.C.  Thus, March 25 was identified by the Church Fathers as:
In the Syrian Church March 25 or the Feast of the Annunciation was seen as one of the most important feasts of the entire year. It denoted the day that God took up his abode in the womb of the Virgin. In fact, if the Annunciation and Good Friday came into conflict on the calendar, the Annunciation trumped it – so important was the day in the Syrian tradition! It goes without saying that the Syrian Church preserved some of the most ancient Christian traditions and had a sweet and profound devotion for Mary and the Incarnation of Christ.
Now then, March 25 was enshrined in the early Christian tradition and from this date it is easy to discern the date of Christ’s birth. March 25 (Christ conceived by the Holy Ghost) plus nine months brings us to December 25 (the birth of Christ at Bethlehem).
Saint Augustine confirms this tradition of March 25 as the Messianic conception and December 25 as His birth:

“For Christ is believed to have been conceived on the 25th of March, upon which day also he suffered; so the womb of the Virgin, in which he was conceived, where no one of mortals was begotten, corresponds to the new grave in which he was buried, wherein was never man laid, neither before him nor since. But he was born, according to tradition, upon December the 25th.”

In about A.D. 400, Saint Augustine also noted how the schismatic Donatists celebrated December 25th as the birth of Christ, but that the schismatics refused to celebrate Epiphany on January 6 since they regarded Epiphany as a new feast without a basis in Apostolic Tradition. The Donatist schism originated in A.D. 311 which may indicate that the Latin Church was celebrating a December 25 Christmas (but not a January 6 Epiphany) before A.D. 311.
Look for the third and final part tomorrow on Christmas (Pope Benedict on December 25 and Christmas).
In the meantime, since it is December 24, let us contemplate Joseph and Mary arriving in Bethlehem walking about looking for shelter for the coming night. Then they are allowed to use the stable cave and around noon Saint Joseph begins to prepare the place for the miraculous event. Joseph and Mary must have been full of quiet expectation. May they pray for us as we also eagerly await the Christ Child.
Godspeed and Merry Christmas,
Taylor Marshall
* A special thanks to the Reverend Father Phil Wolfe for bringing the “memory of Mary” argument to my attention.
** There is some discrepancy in the Fathers as to whether Nisan 14/March 25 marked the death of Christ or his resurrection. Regarding this problem, here is an external post on Julius Africanus and the dating of Christmas and the meaning of March 25.
Comment | Share | Tweet | Buffer | print | email