The Church Fathers believed that the Blessed Virgin Mary was exempt from the curse of Eve and from all sin. While the doctrine of original sin did undergo development (and thus the dogma of the Immaculate Conception), the Fathers of the Church believed that Mary was sinless. Below are some examples: 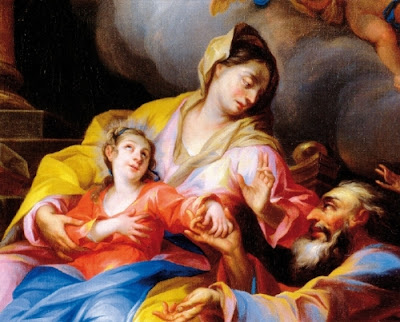 “He was the ark formed of incorruptible wood. For by this is signified that His tabernacle was exempt from putridity and corruption.” Hippolytus, Orations Inillud, Dominus pascit me {ante A.D. 235).

“This Virgin Mother of the Only-begotten of God, is called Mary, worthy of God, immaculate of the immaculate, one of the one.” Origen, Homily 1 {A.D. 244).

“O noble Virgin, truly you are greater than any other greatness. For who is your equal in greatness, O dwelling place of God the Word? To whom among all creatures shall I compare you, O Virgin? You are greater than them all O Covenant, clothed with purity instead of gold! You are the Ark in which is found the golden vessel containing the true manna, that is, the flesh in which divinity resides.” Athanasius, Homily of the Papyrus of Turin 71:216 {ante AD 373).

“We must except the Holy Virgin Mary, concerning whom I wish to raise no question when it touches the subject of sins, out of honour to the Lord; for from Him we know what abundance of grace for overcoming sin in every particular was conferred upon her who had the merit to conceive and bear Him who undoubtedly had no sin.” Augustine, Nature and Grace 4, 36 {A.D.415).

“As he formed her without my stain of her own, so He proceeded from her contracting no stain.” Proclus of Constantinople, Homily 1 {ante A.D. 446).

“A virgin, innocent, spotless, free of all defect, untouched, unsullied, holy in soul and body, like a lily sprouting among thorns.” Theodotus of Ancrya, Homily 6, 11{ante A.D. 446).

“The very fact that God has elected her proves that none was ever holier than Mary, if any stain had disfigured her soul, if any other virgin had been purer and holier, God would have selected her and rejected Mary.” Jacob of Sarug {ante A.D. 521).

“She is born like the cherubim, she who is of a pure, immaculate clay.” Theotokos of Livias, Panegyric for the feast of the Assumption 5:6 {ante A.D. 650).

“Today humanity, in all the radiance of her immaculate nobility, receives its ancient beauty. The shame of sin had darkened the splendour and attraction of human nature; but when the Mother of the Fair One par excellence is born, this nature regains in her person its ancient privileges and is fashioned according to a perfect model truly worthy of God…. The reform of our nature begins today and the aged world, subjected to a wholly divine transformation, receives the first fruits of the second creation.” Andrew of Crete, Sermon 1 On the Birth of Mary {A.D. 733).

“Truly elect, and superior to all, not by the altitude of lofty structures, but as excelling all in the greatness and purity of sublime and divine virtues, and having no affinity with sin whatever.” Germanus of Constantinople, Marracci in S. Germani Mariali {ante A.D. 733).

“O most blessed loins of Joachim from which came forth a spotless seed! Oh glorious womb of Anne in which a most holy offspring grew.” John of Damascus, Homily 1 {ante A.D. 749).

Categories: Church Fathers, Mary
Disclosure of Material Connection: Some of the links in the post above are “affiliate links.” This means if you click on the link and purchase the item, I will receive an affiliate commission. Regardless, I only recommend products or services I use personally and believe will add value to my readers. I am disclosing this in accordance with the Federal Trade Commission’s 16 CFR, Part 255: “Guides Concerning the Use of Endorsements and Testimonials in Advertising.”