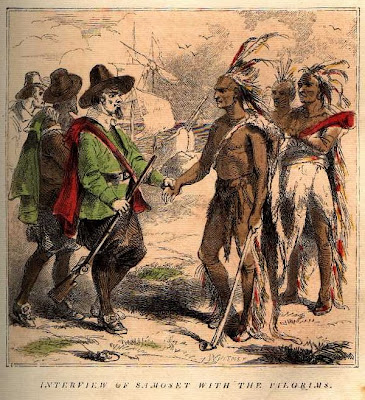 I try to bring this up every year at Thanksgiving because it’s such an interesting bit of information.
Do you remember Squanto, the Native American who assisted the Puritan Pilgrims at the “first Thanksgiving”?
Well, Squanto, our beloved hero of Thanksgiving, was Catholic!
His true name was Tisquantum, yet he is affectionately known to us as “Squanto.”
In 1614, Squanto was captured by a lieutenant of John Smith (remember? from Pocahontas). This shameful lieutenant attempted to sell Squanto and other Native Americans into slavery via Spain. However, some Franciscan friars discovered the plot and acquired the captured Native Americans, Squanto included. During this time, Squanto received instruction in the Catholic Faith and received holy baptism.
As a freeman, Squanto traveled to London where became a laborer in the shipyards. Here he became fluent in English. Eventually, Squanto was able to return to his Native Land, New England, in 1619 – five years after he had been kidnapped. He returned only to discover that his people were being decimated by the recently imported European diseases.
Since he was fluent in English, Squanto became well-known and valuable to the new English Pilgrims settled at Plymouth. As an English speaker, Squanto taught the Pilgrims how to fertilize the ground, grow corn, and the best places to catch fish.
Squanto eventually contracted one of the European diseases. Governor William Bradford described Squanto’s death like this:

Squanto fell ill of Indian fever, bleeding much at the nose, which the Indians take as a symptom of death, and within a few days he died. He begged the Governor to pray for him, that he might go to the Englishman’s God in heaven, and bequeathed several of his things to his English friends, as remembrances. His death was a great loss.

So remember Squanto today and perhaps share this bit of history during your Thanksgiving feast. Let us pray for Squanto, and may he pray for us.
More Catholic Thanksgiving Trivia
Another interesting bit of trivia is that the first American Thanksgiving was actually celebrated on September 8, 1565 in St. Augustine, Florida. The Native Americans and Spanish settlers held a feast and the Holy Mass was offered. Another “Catholic Thanksgiving” celebration occurred on American soil on April 30, 1598 in Texas when Don Juan de Oñate declared a day of Thanksgiving to be commemorated by the Holy Sacrifice of the Mass.
All that being said, Thanksgiving is traditionally Protestant and marks the tradition of religious toleration (something in which the Puritan pilgrims did not actually believe – they set up a “theocracy”).
My wife once taught at a high-church Episcopalian/Anglican classical school in Philadelphia. The school consciously played down the significance of Thanksgiving. Why? The reason is simple. At root, Thanksgiving commemorates the good fortune of political and ecclesiastical rebels against the Church of England and the Anglican tradition as a whole.
It all started with Richard Clyfton who was a Church of England parson in Nottinghamshire in the early 1600s. Clifton sympathized with the Separatists of that era. Separatists were Calvinistic non-conformists to the doctrine and liturgy of the Church of England. The Hampton Court Conference held by King James I (1604) condemned those who would not conform to the more outwardly Catholic usages in the Church of England (e.g. robes, candles, bowing the head at the name of Christ, processions). The result was that Richard Clyfton was “defrocked” and stripped of his clerical status in the Church of England. Shortly thereafter Richard Clyfton went to Amsterdam and was followed by his disciples: the Pilgrims.
These Pilgrims moved around a bit until finally coming to America in 1620. An interesting bit of trivia is that one child was born on board the Mayflower while at sea. The child was given the rather lame name: “Oceanus”. Poor child.
In 1621, the Pilgrims allegedly celebrated a happy meal with the Native Americans and the rest is history. So why would an Anglican school be against Thanksgiving? It celebrates those who defied the Church of England and the Crown of England.
Now that I’m no longer an Anglican and now a Catholic, things are a bit different. The penal laws of England regarding non-conformists affected not only the rigorous Calvinistic Puritans in England, but also the English Catholic recusants. The Pilgrims shared the same lot as the Catholic faithful of England. Interestingly enough, the Catholics who lived in Nottinghamshire where the Pilgrims originated were persecuted mercilessly.
So while Thanksgiving may celebrate the Calvinist Separatists who fled England, Catholics might remember the same unjust laws that granted the crown of martyrdom to Thomas More, John Fisher, Edmund Campion, et al. are the same injustices that led the Pilgrims to Plymouth.
And let everyone remember that “Thanksgiving” in Greek is Eucharistia. Thus, the Body and Blood of Christ is the true “Thanksgiving Meal”.
Comment | Share | Tweet | Buffer | print | email