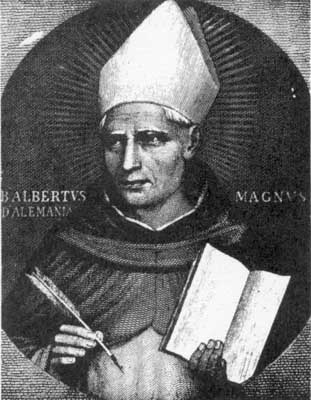 Albert the Great is arguably the best thinker of Germanic history. He became a master of his time in physics, biology, botany, astronomy, chemistry, history, music, philosophy, and theology. For this reason was called by his contemporaries the “Doctor Universalis.” He was called Albert “the Great” even in his own lifetime. According to tradition he received an apparition of the Blessed Virgin Mary who inspired him to pursue Holy Orders. His decision to become a Dominican brought prestige to the new Order of Preachers.
What is interesting is that this great saint was also accused of being an alchemist and a magician. The reason for this is that certain esoteric alchemist texts were written pseudonymous with his name appended ts as to gain a wider readership. This are the Pseudo-Albertine manuscripts. The authors of these texts realized that they would be more widely received if they bore the name of the most intelligent man of that era. According to one tradition, Saint Albert discovered the “Philosopher’s Stone” which could be used to turn base metals into gold or alternatively create the elixir of eternal life. We know the story is fake because it explains how Saint Albert the Great passed the Philosopher’s Stone to Thomas Aquinas just before his death. The problem is that Thomas Aquinas died before Albert the Great!
Also of interest is the fable that Albert the Great made a robotic automaton in the form of a brass head that would answer questions (i.e. something like the iPhone 4S but in the form of a brass bust).
Of course, Saint Albert is best-known for his greatest disciple: Saint Thomas Aquinas.
Saint Albert the Great, pray for us!
Comment | Share | Tweet | Buffer | print | email