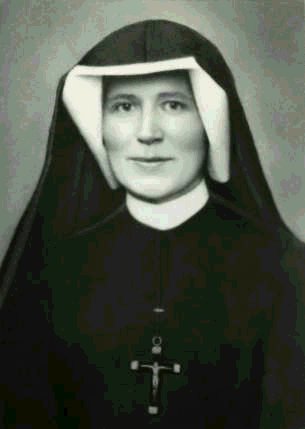 Saint Faustina (1905-1938) Apostle of Divine Mercy
Today there is an unspoken assumption that “everyone” is going to Heaven. Fire and brimstone theology is certainly not fashionable, and it has never been comfortable. Moreover, Balthasar’s “dare that we hope that all men be saved” has led to “how dare you suggest that not all men are saved!!!”
Yet, the two most important revelations of the 20th century (to the children of Fatima and to St Faustina) emphasize both that Hell exists and that Hell is inhabited by demons and humans. Below is Saint Faustina’s vision of Hell that Christ revealed to her. It is as vivid as anything produced by Dante. The following is taken from the journal of Saint Faustina:

Today, I was led by an Angel to the chasms of hell. It is a place of great torture; how awesomely large and extensive it is!

The kinds of tortures I saw: the First torture that constitutes hell is the loss of God; the Second is perpetual remorse of conscience; the Third is that one’s condition will never change; the Fourth is the fire that will penetrate the soul without destroying it – a terrible suffering, since it is a purely spiritual fire, lit by God’s anger; the Fifth torture is continual darkness and a terrible suffocating smell, and, despite the darkness, the devils and the souls of the damned see each other and all the evil, both of others and their own; the sixth torture is the constant company of Satan; the Seventh torture is horrible despair, hatred of God, vile words, curses and blasphemies.

These are the tortures suffered by all the damned together, but that is not the end of the sufferings. There are special tortures destined for particular souls. These are the torments of the senses. Each soul undergoes terrible and indescribable sufferings, related to the manner in which it has sinned. There are caverns and pits of torture where one form of agony differs from another. I would have died at the very sight of these tortures if the omnipotence of God had not supported me. Let the sinner know that he will be tortured throughout eternity, in those senses which he made use of to sin.

I am writing this at the command of God, so that no soul may find an excuse by saying there is no hell, or that nobody has ever been there, and so no one can say what it is like. {TRM: This is similar to the vision of Hell and Our Lady’s warning at Fatima}

What I have written is but a pale shadow of the things I saw. But I noticed one thing: that most of the souls there are those who disbelieved that there is a hell. How terribly souls suffer there! Consequently, I pray even more fervently for the conversion of sinners. (Diary of St. Faustina, 741)

Let us trust in Christ, pray, repent of our sins, love God and neighbor and adhere to the true Faith “without which it is impossible to please God” (Heb 11:6).
Saint Faustina, pray for us.
Jesus, our Divine Mercy, have mercy on us.
HT: Christine McCabe
Comment | Share | Tweet | Buffer | print | email