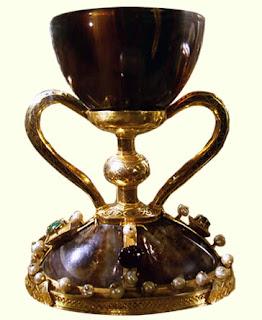 The Holy Chalice of Valencia is the alleged chalice used by the first 22 popes until Sixtus II who then gave it to St Laurence for safe keeping. After the martyrdom of Laurence, the chalice was taken to Spanish for safe keeping, The chalice is authenticated by a certificate said to date from AD 262. The physical properties of the Holy Chalice are described and it is stated the vessel had been used to celebrate Mass by the early Popes from Saint Peter until Pope Saint Sixtus II.
Details
The Holy Chalice as depicted above is a hemispherical cup made of dark red agate which is mounted by means of a knobbed stem and two curved handles onto a base made from an inverted cup of chalcedony. The agate cup is about 9 centimeters/ 3.5 inches in diameter and the total height, including base, is about 17 centimeters 7 inches high
It’s a really old Egyptian cup
After an inspection in 1960, the Spanish archaeologist Antonio Beltrán asserted that the cup was produced in a Palestinian or Egyptian workshop between the 4th century BC and the 1st century AD.
Spain and the Holy Chalice
The Holy Chalice was hidden during the Mohammedan occupation of Spain beginnin gin AD 711. Historical mention is made of it in AD 1134 and AD 1399.

Sharing Christ and Getting Arrested: Catholic Evangelism Tips for a Hostile Culture

Trump vs. Biden: Who Will Win Nov 3? with Jesse Romero and Dr. Taylor Marshall