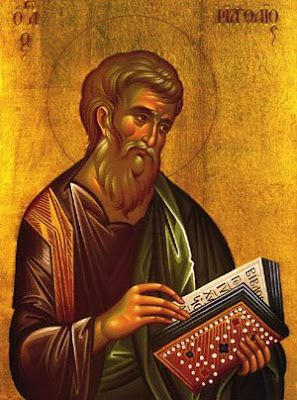 For the first 1,500 years of Christianity, the Church unanimously held that the Gospels were historically written in the order we find them in the canon: Matthew first, Mark second, Luke third, and John last of all.
The reason for Matthew’s priority is simple: the testimony of the ancient witnesses describe Matthew’s Gospel as first and as written in Hebrew/Aramaic. Here is Saint Augustine on the issue:

“Now, those four evangelists whose names have gained the most remarkable circulation over the whole world, and whose number has been fixed as four, …are believed to have written in the order which follows: first Matthew, then Mark, thirdly Luke, lastly John.”

“Of these four, it is true, only Matthew is reckoned to have written in the Hebrew language; the others in Greek. And however they may appear to have kept each of them a certain order of narration proper to himself, this certainly is not to be taken as if each individual writer chose to write in ignorance of what his predecessor had done.”

St. Augustine, The Harmony of the Gospels, 2.

Yet there is another reason why Matthew would have written the first Gospel of Christ – he owned paper and ink! Think about it. The other Apostles were fishermen. Matthew was a tax collector which meant that he was a record keeper and an accountant. In a time when writing, parchment, and ink were rare commodities, it is fitting that the one Apostle with access to such things would be the first to WRITE the life of Christ.
That recent belief that Matthew is not the first Gospel arose because people first began to doubt the resurrection of Christ and His divinity. As such, the Christian message would have to have been falsified. It was assumed that the shortest and plainest Gospel would have been the earliest. Thus, liberal scholars crowded around the Gospel of Mark as the “earliest” since it does not contain much of Christ’s teaching and it’s resurrection account is the simplest. Then, they postulated that an unknown source of sayings (the so-called “Q”) was used to “fill in” the teachings of Christ. This is entirely ad hoc and has no historical basis. Moreover, Q scholars debate and divide over the issues.
The historic testimony is against this Markan theory. The saints and Fathers teach that Matthew came first – and this simply makes sense.
St Matthew the Evangelist, pray for us!
Comment | Share | Tweet | Buffer | print | email

Categories: Church Fathers, Tradition
Disclosure of Material Connection: Some of the links in the post above are “affiliate links.” This means if you click on the link and purchase the item, I will receive an affiliate commission. Regardless, I only recommend products or services I use personally and believe will add value to my readers. I am disclosing this in accordance with the Federal Trade Commission’s 16 CFR, Part 255: “Guides Concerning the Use of Endorsements and Testimonials in Advertising.”