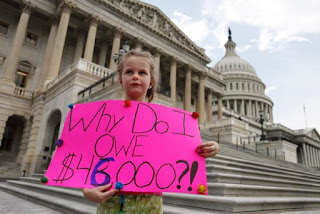 We all know that abortion, euthanasia, contraception, and homosexual “marriage” are intrinsic evils contrary to the natural law. Our Holy Father and our bishops speak out regularly against this social sins. Thanks be to God. Certain bishops also regularly speak out against other social injustices, for example, those sins associated with the ins-and-outs of immigration and human trafficking.
But there is another great evil and that nobody in the Church is talking about – it effects not only Americans, but Europeans, Africans, Asians, etc. It’s “national debt” and the disastrous effect it will have on our children.*
“The rich rules over the poor, and the borrower is the slave of the lender.” (Proverbs 22:7)
If every single American child is de facto indebted $47,000 (I don’t know the stats for other nations), thanks to our lawmakers, are we not making children into “debt slaves”? This generation is robbing and enslaving the next generation. It’s wrong…and it’s only getting worse.
On a similar note, I suspect that college debt and personal debt among 20-year-olds is likely the chief occasion of sin for contraception. Newly married couples with large amounts of debt do not feel free to have children, so they contracept…and abort.
If we’re serious about social justice, we need to be serious and vocal about debt. To be frank, our governments are committing usury against the next generation.
Turning children into debtors? Debtors are slaves.
“But he that shall scandalize one of these little ones that believe in me, it were better for him that a millstone should be hanged about his neck, and that he should be drowned in the depth of the sea.” (Matthew 18:6)
* Please know that I’m not suggesting that indebtedness is as equally sinful as such sins as abortion, contraception, etc. It’s not. However, it doesn’t mean it’s not important.
Comment | Share | Tweet | Buffer | print | email