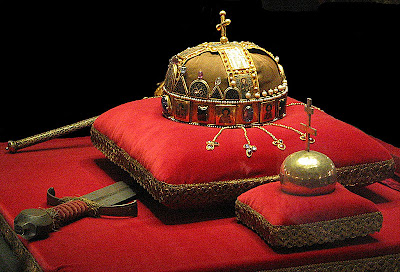 Sacred Crown of St Stephen of Hungary with “crooked cross”
The Holy Crown of Saint Stephen of Hungary is one of the greatest second-class relics of the world. It symbolizes King Saint Stephen’s desire for the Blessed Virgin Mary to rule over Hungary. It also forms the basis for the Hungarian “doctrine of the crown.”
In the year A.D. 1000 Saint Stephen held up the crown during the coronation Mass to offer it to “Nagyboldogasszony” (“Our Lady”) in order to seal a divine covenant between the Blessed Virgin Mary and the physical crown. This is the origin of the Hungarian “doctrine of the crown.” Jesus and Mary are the true monarchs of Hungary and the one wearing the physical crown becomes their deputy. No king of Hungary was regarded as having been truly legitimate without being crowned with the Sacred Crown. In the history of Hungary, more than fifty kings were crowned with the Sacred Crown of Our Lady.
The last monarch to wear the Sacred Crown was a Blessed of the Catholic Church – Blessed Charles of Austria and Hungary. 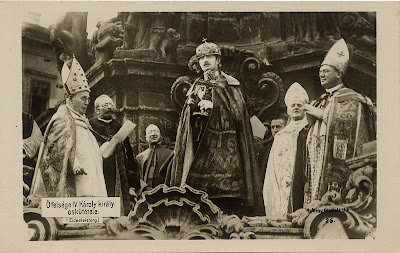 Blessed Charles wearing the Sacra Corona of Hungary
The crown is well-known and identified by the “crooked cross” on its top. This cross became crooked in the seventeenth century when the crown was damaged, possibly by the top of the iron chest housing the insignia being hastily closed without the crown having been placed in it properly. The cross has since been left in this slanted position. The crooked cross has become its most famous feature.
Saint Stephen, Apostolic King of Hungary, pray for us.
Comment | Share | Tweet | Buffer | print | email