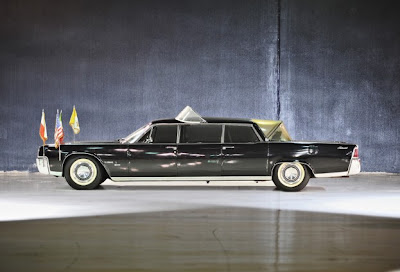 We’ve grown accustomed to white Popemobiles. That wasn’t always the case. The Popemobiles were once black.

The photo above is of the black Popemobile for Pope Paul VI’s first visit to the United States. The vehicle is a customized 1964 Lincoln Continental. This same ’64 Continental Popemobile is now up for auction at Bonhams on August 19 in California, where it’s expected to sell for up to $350,000. I rather like it.
This 1964 Popemoblie was custom built by Lehmann-Peterson for Pope Paul VI’s visit to the New York in 1965 to speak at the United Nations and celebrate Holy Mass at Yankee Stadium. According to RM Auctions, the Lincoln Continental was commissioned by Henry Ford II for the pope’s first visit to the western hemisphere, after Ford determined the Continental was, “more appropriate” than the Ford LTD the Vatican originally requested.
The Vatican asked for this popemobile to be built with a transparent bubble roof, a convertible top, and a throne in the rear to allow the Pontiff to be better seen by crowds. The Continental Popemobile also included running boards for the Swiss Guards, and a public address system.

After the Holy Father’s visit, the 1964 Lincoln Continental popemobile was shipped back to Chicago. While in Chicago, it spent some time chauffeuring astronauts from the Apollo 8 and 13 missions (including Buzz Aldrin and Neil Armstrong), during ticker tape parades.

This same Popemobile-Continental was shipped to Bogota, Columbia for Pope Paul VI’s visit there in 1968.

PS: Did the Swiss Guards once travel with the Holy Father? If so, this custom should be restored. I also wouldn’t be opposed to Swiss Guards wearing secret-service ear pieces and holding AR-15s. I’m just sayin’.