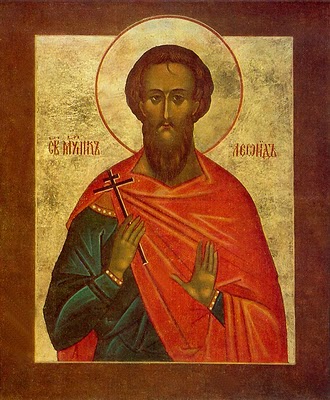 The famous theologian Origen (AD 185–254) is not a saint of the Catholic Church: he had some whacky ideas about our souls pre-existing, Adam’s creation as incorporeal, and a fuzzy doctrine of apokatastasis (the teaching everyone will be finally saved and Hell is only a form of purgatory). It is also alleged that Origen castrated himself in order to obey the Words of Christ quite literally:

So needless to say, Origen had some odd ideas.

However, the father of Origen, Saint Leonides is a canonized saint of the Catholic Church. Saint Leonides and his wife had nine children – one of which was Origen.
One tradition records that during the persecutions, the early Christians were deprived of the Holy Eucharist. So Saint Leonides and his family would gather around the newly baptized infant Origen, believing that the Holy Trinity was so preeminently present in the soul of the newly baptized. In this way they experienced the presence of God in their midst. A touching story and a reminder of the glories of infant baptism.
Saint Leonides catechized his children well, and finally suffered the glory of martyrdom in AD 202 in the persecution of Emperor Septimus Severus. Origen attempted to follow his father in martyrdom, but he was detained by his mother (she hid his clothes so that Origen couldn’t leave the house).
Saint Leonides feast day is April 22 and the Roman Martyrology lists him on this day:
Alexandríæ natális sancti Leónidæ Mártyris, qui sub Sevéro passus est.
At Alexandria, the birthday of the Saint Leonides the martyr, who suffered under Severus.
Saint Leonides, pray for us.
Comment | Share | Tweet | Buffer | print | email