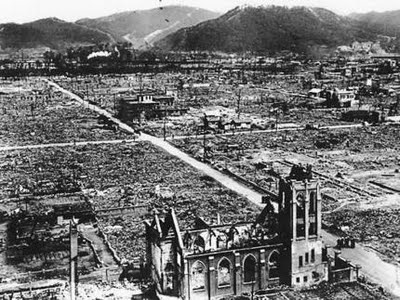 On 6 August 1945, the feast of the Transfiguration of Christ, an American bomber dropped an atomic bomb that detonated 1,900 feet above Hiroshima, Japan. The blinding explosion killed everyone in a one-mile radius from “ground zero”—an estimated 60,000 men, women, and children.
On this date, a miracle occurred of which few have heard. The only survivors within that one mile radius were eight Jesuit priests. These eight men, like the eight that survived the Great Flood, walked away from the atomic blast and lived into old age without radiation poisoning.
The Jesuit Father Hubert Schiffer, one of these survivors, was thirty years old at the time of the Hiroshima blast in 1945. After celebrating the Holy Sacrifice of the Mass for the feast of the Transfiguration, he sat down for breakfast when all the windows in every direction pulsed with light.
Here is Father Schiffer’s description of what happened: “A terrific explosion filled the air with one bursting thunder stroke. An invisible force lifted me from the chair, hurled me through the air, shook me, battered me, whirled me round and round.”
He experienced a few minor injuries, yet American Army doctors confirmed that he and his seven companions suffered neither severe injuries nor radiation damage.
When asked why he and his fellow Jesuits were unharmed while everyone else in the one mile radius had died, Father Schiffer answered: “We survived because we were living the message of Fatima. We lived and prayed the Rosary daily in that home.”
The story reminds us Noah’s salvation in the ark, the deliverance of Daniel in the lion’s den, and, most of all, the preservation of Anania, Azaria, and Misael in the fiery furnace of Nebuchadnezzar.
Nagasaki, the home of two-thirds of Japanese Catholics, suffered the second atomic bomb on 9 August 1945. This city which had become the “Japanese capital of Catholicism” was obliterated. However, the Franciscan Friary established by Saint Maximilian Maria Kolbe in Nagasaki remained undamaged. St Maximilian had previously decided to go against the advice that he had been given to build his friary in a certain location closer to the city. Instead, St Maximilian chose a location behind an intervening mountain. When the atomic bomb exploded, the Marian friary was protected and preserved. This special miracle reminds us of the words of King David and the canticle of Jeremiah and Ezekiel: “Thou who preparest the mountains by thy strength, being girded with power” (Psalm 64:7).
Please live the message of our sweet Mother delivered at Fatima: pray the Rosary daily (5 decades), wear the Brown Scapular of Mt Carmel, and attend Holy Mass on First Saturdays.
Recommended book on Fatima:
Comment | Share | Tweet | Buffer | print | email