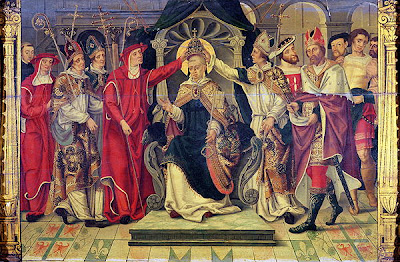 In ancient days, when the liturgy of Roman Church was regal and glorious, a pious custom was observed on Ascension Thursday.
In Rome, Ascension Thursday was always celebrated at the Basilica of Saint Peter (the Vatican). The Holy Father the Pope would celebrate the Holy Sacrifice of the Mass on the high altar over the tomb of Saint Peter.
After Holy Mass, the Cardinals would gather around the Pope for a coronation ceremony. The cardinals would solemnly crown the Pope as the Vicar of Christ on earth. Then the Pope and the cardinals would go to Saint John Lateran, the Cathedral Church of Rome, the Mother and Mistress of all Churches.
What does all this mean?
Our Lord Jesus Christ is the true King and High Priest of Heaven and Earth. He is the King of Glory. Now Our Lord appointed Saint Peter and gave him a divine name used for God in the Psalms: Rock or Petrus. He also committed to Peter the Keys of the Kingdom and gave to him universal jurisdiction of the entire earth: “whatever you bind on earth.” I would like to remind the separated Easterns that Peter was not merely the Patriarch of the West (Christ did not say, “whatever you bind in Europe”) but was the Supreme Pontiff over the entire earth.
So then, Ascension Thursday marks the earthly reign of the Saint Peter. When Christ leaves the earth by ascending to the right hand of God the Father, Saint Peter at that moment officially became the “Vicar of Christ on earth.” Vicar, of course, means “in the place of,” as in “Vice-President.”
So Peter is not God. He is not Jesus Christ. He is not even an angel. He is certainly not sinless. However, Peter is the divinely appointed chief of the Church of Christ on earth. He reigns for his Lord in Heaven. This is true for all the Popes who have succeeded Saint Peter in this office.
So then, the cardinals symbolically crowned the Successor of Saint Peter on this day to signify this profoundly biblical truth of Saint Peter’s office and role.
Let us pray that our rich liturgical tradition is resurrected to the greater glory of God.
ad Jesum per Mariam
Taylor
PS: There is nothing pompous or audacious about the Pope wearing a crown or papal tri-regnum. The Pope always wears a ceremonial hat (the mitre). It might as well be a hat that properly identifies his authority.
Here’s a video of the inaugrual coronation of His Holiness Pius XII:
Comment | Share | Tweet | Buffer | print | email