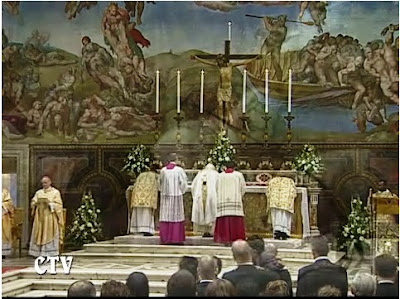 Pope Benedict XVI ad orientem
Saint Thomas Aquinas, our Angelic Doctor, explains the mystical symbolism of the resurrection of Christ in ancient Roman liturgy of the Holy Sacrifice of the Mass.
In the older rite, when the priest celebrates ad orientem, the priest turns around exactly five times to face the people. This, says Saint Thomas, signifies the five appearances of the resurrected Christ on Easter Sunday (see Augustine, De Consens. Evang. 3, for details on the fivefold appearance of Christ on Easter Sunday).
Here’s Saint Thomas on the liturgical resurrection symbolism of the “five priestly turns” toward the people:

“Five times does the priest turn round towards the people, to denote that our Lord manifested Himself five times on the day of His Resurrection, as stated above in the treatise on Christ’s Resurrection. But the priest greets the people seven times, namely, five times, by turning round to the people, and twice without turning round, namely, when he says, “The Lord be with you” before the “Preface,” and again when he says, “May the peace of the Lord be ever with you”: and this is to denote the sevenfold grace of the Holy Ghost. But a bishop, when he celebrates on festival days, in his first greeting says, “Peace be to you,” which was our Lord’s greeting after Resurrection, Whose person the bishop chiefly represents.” (Summa theologiae III, q. 83, a. 5, ad. 6)

If you have the opportunity to worship according to the Extraordinary Form of the Holy Mass approved by His Holiness Benedict XVI (1962 Missal of Pope John XXIII), you will be able to experience this ancient and rich detail of of the Roman liturgy.
It is also worth noting that the Catholic bishop himself especially signifies our resurrected Lord, as Thomas relates at the end of the quote above – this is because the bishop possesses the fullness of the sacrament of Holy Orders.
Comment | Share | Tweet | Buffer | print | email

Categories: Liturgy, Pope, Thomas Aquinas
Disclosure of Material Connection: Some of the links in the post above are “affiliate links.” This means if you click on the link and purchase the item, I will receive an affiliate commission. Regardless, I only recommend products or services I use personally and believe will add value to my readers. I am disclosing this in accordance with the Federal Trade Commission’s 16 CFR, Part 255: “Guides Concerning the Use of Endorsements and Testimonials in Advertising.”