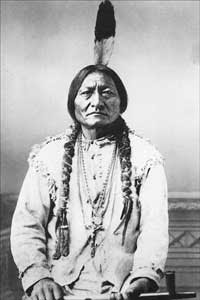 Sitting Bull (sitting) wearing his crucifix
Not long ago, I was speaking with Father Phil Wolfe about the evangelization of the Flathead Indians in northwest America. He stood up up from his desk and went to one of his many bookshelves and pulled down a book. He opened it and set it in front of me with a page open to a photo.
“Who’s that?”
I had seen the photo several times since my youth. It’s in every student’s US History book. “That’s Sitting Bull,” I said.
“Have you ever seen this photo before?” he asked.
“Yes, of course.”
Father said, “Really. Look closer. Have you ever seen the non-cropped version of the Sitting Bull?”
I took another look. I couldn’t believe it. Sitting Bull was wearing a crucifix!
That’s correct. Sitting Bull wore a crucifix and apparently was baptized into the Catholic Faith by Father De Smet of the Jesuits. Here’s one account from a biography on General Custer:

It was stated at one time that Sitting Bull, while hating the white Americans and disdaining to speak their language; was yet very fond of the French Canadians, that he talked French, and that he had been converted to Christianity by a French Jesuit, named Father De Smet. How true this may be is uncertain, but probably there is some foundation for it. The French Jesuits have always been noted for their wonderful success in winning the affections of the Indians, as well as for the transitory nature of their conversions, and it is very possible that Father De Smet may have not only baptized Sitting Bull at some time, but induced him and his braves to attend mass, as performed by himself in the wilderness. The benefits of the conversion seem however to have been only skin deep, as far as preventing cruelty in war is concerned. (Whittaker, A Complete Life of General Custer, Volume 2, 535).

I think the photo reveals that this story is more than a legend. Sitting Bull wore the emblem of the Crucified Son of God from his neck. It’s a pity that the image is usually cropped  in magazines and textbooks so as to hide the crucifix. This just reveals that American political correctness has led to the revision of history. The photo has been cropped for so long that virtually no one knows that Sitting Bull wore a crucifix!
So pray for the repose of the soul of Thathánka Iyotake (Sitting Bull), who died on Dec 15, 1890.