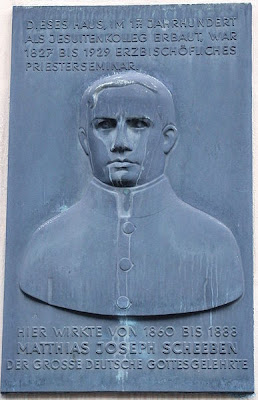 I’m sitting in the Denver airport drinking an amazing new ale – the 400 Pound Monkey Indian Pale Ale. I just attended a FANTASTIC conference on the 19th century theologian Matthias Joseph Sheeben, hosted by Nova et Vetera and the Augustine Institute.
M.J. Scheeben (1835-1888) was a German theologian who assimilated the Thomistic tradition against German Protestantism and also against what could be labeled as “proto-Modernism.” His theology centers on the mystery of nature and grace, the hypostatic union of Christ’s two natures, and the significance of the beatific vision. He is also celebrated as an important figure in Mariology.
Scheeben is especially important in the dialogue/debate surrounding Henri de Lubac’s challenge against the received scholastic tradition regarding nature and grace. My own doctoral research on this topic touches on the “problem” of the natural and supernatural end(s) of man. Consequently, I did not want to miss to this conference. Moreover, Nova et Vetera consistently presents quality scholarship. Their roster of speakers was second to none:
Dr. Bruce Marshall (SMU)
Dr. Matthew Levering (U of Dayton)
Dr. Reinhard Hütter (Duke)
Dr. Edward Sri (Augustine Institute)
Fr. Edward Oakes, SJ (U of St. Mary of the Lake in Mundelein)
Dr. Jared Staudt (Augustine Institute)
Fr. Thomas Joseph White, OP (Dominican House, DC)
Fr. Charles Morerod, OP (Secretary General of the International Theological Commission)
Fr. Richard Schenk, OP (Regent of Studies, Western OP Province)
Dr. Scott Hahn (Franciscan University)
I learned very much and I’m coming home with some great notes. It was a great weekend to meet new people and see old friends. Most of all, I’m grateful for the presentations and all the conversations during our breaks about nature, grace, de Lubac, Suarez, Garrigou, Aquinas, Scotus, limbo, deification, etc. It was great…but I’m tired.
Learn more about the Augustine Institute and Nova et Vetera.
Michael Barber over at Sacred Page has also been discussing MJ Scheeben.
Comment | Share | Tweet | Buffer | print | email