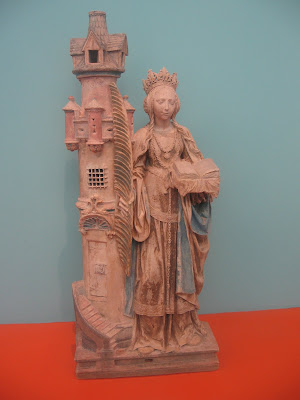 Saint Barbara and her tower
The new children’s movie Tangled

about Rapunzel came out on DVD. It’s the animated film version of a German fairy tale in the collection by the Brothers Grimm published in 1812. In the original Grimm tale, Rapunzel is locked away in a tower. One day she “lets down her hair” to a prince who climbs up to her. Her clothing soon after becomes tight around the belly and within nine month’s time, it becomes quite the baby-bump. She is eventually freed and marries the prince and then delivers twins. Fortunately the Disney version cuts out the tower fornication and the pregnancy details. Instead, the Disney version is about an evil stepmother who desires the rejuvenating power of Rapunzel’s magical blond hair. 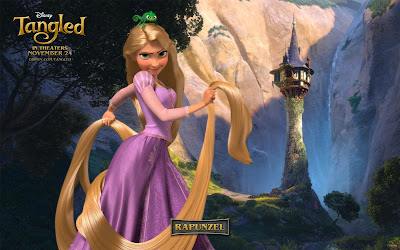 Setting the perverted Grimm version aside, the story of a “princess locked in a tower” derives originally from the life of Saint Barbara who received martyrdom on December 4 or 5, AD 267. Grimm seems to have transformed the story into a “lust-in-the-dust” romance, whereas the original story was about virginal marriage to Christ and martyrdom.
Princess Barbara was the daughter of the pagan Dioscorus who lived in Nikomedia (in modern day Turkey) in the third century. Her father locked her in a tower with two windows. A Catholic priest snuck into her chamber disguised as a physician. Over time, he taught her the Catholic Faith and baptized her. She subsequently installed a third window in her tower to symbolize the Holy Trinity.
When her father returned and discovered the third window, she confessed herself as a Christian. Her father murdered her and she thereby gained the palm of martyrdom. Unlike Rapunzel, she became a consecrated bride of Christ and united her soul and body to Him in her final hour.
Anyway, if your kids have seen the film Tangled, this could be a good opportunity to share with them the story of a wonderful saint – Saint Barbara – the true princess “locked in a tower.”
Comment | Share | Tweet | Buffer | print | email