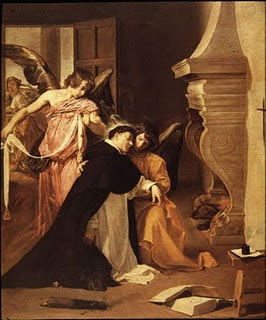 While in Washington, D.C. our high school students visited the Dominican House of Studies on the campus of the Catholic University of America. The Dominican priest Father James Brent told us about the Confraternity of Angelic Warfare (Militia Angelica), which is based on the miraculous cord of Saint Thomas Aquinas.Those who belong to the Confraternity wear a blessed cord of Saint Thomas Aquinas (or medal) and pray daily for the gift of holy purity and chastity.

After Thomas Aquinas chased the harlot from his room in his family’s prison with a burning log, he inscribed a cross on the wall and fell into a mystical ecstasy. Two angels came and girded him with a miraculous cord and said, “Behold, we grid thee by the command of God with the girdle of chastity, which henceforth will never be imperiled. What human strength can not obtain, is now bestowed upon thee as a celestial gift.

From that time forward, Thomas received the gift of perfect chastity so that he never again experienced sexual temptations. This account is included in the official records of his canonization. It is depicted in the image above.

Saint Thomas wore that girdle till the end of his life, at which time he discovered to his friend, Reginald of Piperno, the grace he had received. The heavenly girdle was presented to the ancient monastery of Vercelli in Piedmont, St. Thomas’ mother-house, by John of Vercelli, who entered upon the Office of General of the Order in 1274, the year of the saints’ death. The holy girdle is now at Chieri, near Turin.

It is formed of many fine threads, but of what material the sharpest eye in unable to decide. One end has a double loop through which the cord is drawn in girding. The part that goes around the waist is flat, somewhat wider than a flattened straw, the other part consists of two fine, four corned cords, which are tied into fifteen knots all alike and of peculiar make. The whole length of the girdle is not quite one and a half meters (a meter= 39.37 inches). The color, originally white is, through age and the repeated touching of other girdles, somewhat brown or rather pearl-color.

Pilgrims began to touch homemade cinctures to this original miraculous girdle and wear them for the sake of holy purity. Soon, this practice became well-known and widespread.

The Dominican Father Francis Deurwerders suggested uniting all that wore these girdles of St. Thomas into a Confraternity under the title “Militia Angelica” or “Angelic Warfare.” From the 1600s, this confraternity has continued the tradition.

Our young people went through the liturgy of being enrolled and registered in the Confraternity of Angelic Warfare and were give the girdle (bearing 15 knots for the 15 decades of the Holy Rosary) and the prayers to be recited every day for the gift of purity. I joined and I’m wearing the holy cored as I write this post.

Here are the 2 daily prayers to also be said with 15 Hail Mary’s:

The Prayer to St. Thomas for Purity
Chosen lily of innocence, pure St. Thomas,
who kept chaste the robe of baptism
and became an angel in the flesh after being girded by two angels,
I implore you to commend me to Jesus, the Spotless Lamb,
and to Mary, the Queen of Virgins.
Gentle protector of my purity, ask them that I,
who wear the holy sign of your victory over the flesh,
may also share your purity,
and after imitating you on earth
may at last come to be crowned with you among the angels. Amen.

The Prayer of St. Thomas for Purity
(St. Thomas wrote this one)
Dear Jesus,
I know that every perfect gift,
and especially that of chastity,
depends on the power of Your providence.
Without You a mere creature can do nothing.
Therefore, I beg You to defend by Your grace
the chastity and purity of my body and soul.
And if I have ever sensed or imagined anything
that could stain my chastity and purity,
blot it out, Supreme Lord of my powers,
that I may advance with a pure heart in Your love and service,
offering myself on the most pure altar of Your divinity
all the days of my life. Amen.

For more information on the Confraternity of Angelic Warfare, please visit their website.