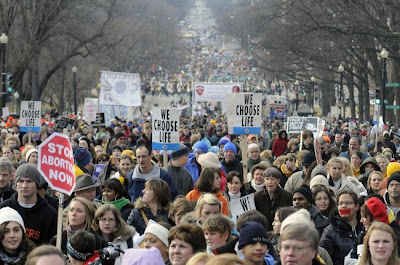 This was my third March for Life and, by far, the best one yet. I saw more young people, and certainly more priests than every before. It is also the first time that I didn’t see any countering “pro-choice” protesters anywhere. In the past I’ve seen a few here and there. Maybe they were there, but I didn’t see any.

Another encouraging sign was this year’s new attention to other life life issues – especially that of euthanasia as it regards the elderly and those with mental handicaps (the so-called “clinically brain dead”).

Personally, I was encouraged about the cause, but discouraged concerning the state of our nation. While in DC, we visited our nation’s monuments and celebrated our great history. However, I had this sense that our country has moved further down the path of destruction. Maybe I’m just older and less idealistic. Maybe it’s the leadership of President Obama. Maybe it’s growing distrust of the political order in general. It feels like America is losing herself.

Whatever happens in the years to come, it is encouraging to see so many young people and young clergy and religious fighting the fight. Nations come and go. The Kingdom of Christ endures. King David said, “Trust not in princes.” That’s true even if they are “pro-life political princes.” Even if our nation is weaker, the Church appears a little bit stronger. Perhaps this is just where we need to be.

During the speeches, my eyes fell on a Carmelite brother in a very rough and worn brown habit. He bore a beard and appeared recollected the entire time. I looked down and saw that he wore simple thong sandals and no socks. It was below freezing outside and there were his toes. Let me tell you, my toes were cold and I was wearing two pairs of socks. He had to have been suffering.

I understood in that moment that we can’t win this fight with just speeches, t-shirts, and banners. That thin, bearded Carmelite brother was secretly and quietly overcoming the demonic principalities in our nation’s capital. He was doing it through recollected silence and penance. He was the the true sign of contradiction against the culture of sex, the culture of excess, and the culture of death.

May God richly reward him, hear our prayers, and bring this national scourge to and end.

Our Lady, Mother of the All the Living, pray for us.

PS: If you were at the March, please feel free to share your thoughts and what you saw. 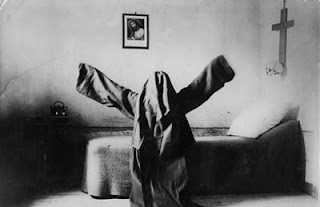