Comment | Share | Tweet | Buffer | print | email
Genesis 3:15 is the called the Proto-Evangelium (or “First-Gospel”). In this passage, God promises to defeat Satan through the operation of “the woman” and “her seed.” Tradition identifies the “the woman” as the Blessed Virgin Mary and “the seed” as our Lord Jesus Christ. 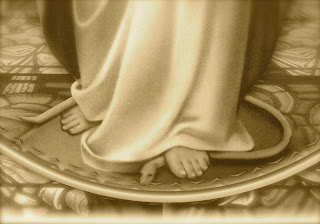 For Catholics, the “she” reading is the traditional reading of the Latin Vulgate and it is important because it highlights the importance of “the woman” (i.e. Mary) in human salvation. In other words, the “she shall crush” reading supports the Catholic argument that Mary’s role as Mother of God makes her Mediatrix and her role as New Eve makes her Coredemptrix.

So then, these three great Jewish scholars testify to the traditional Catholic reading of the Latin Vulgate. Why are the Hebrew manuscripts that we have today different from these ancient Jewish witnesses. The answer is that the Masoretic manuscript tradition has been corrupted – something claimed by the both the Eastern and Western Fathers throughout the centuries.

Even though I have previously used “he shall crush” in my first book and on this blog, I’m going to revert to the traditional reading of Gen 3:15 from herein out: “she shall crush your head.”

“I will put enmities between thee and the woman, and thy seed and her seed: she shall crush thy head, and thou shalt lie in wait for her heel” (Gen 3:15).

O Mary conceived without sin, pray for us who have recourse to thee.