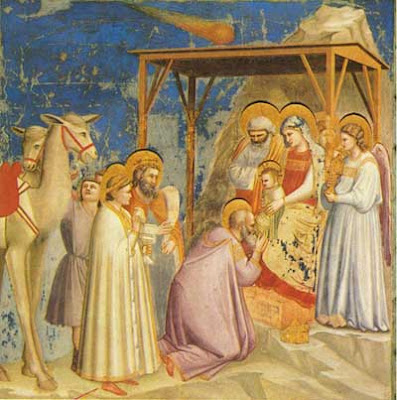 In the post yesterday entitled “The Nativity Story Movie – Blasphemous and Sacrilegious,” with 54 comments and counting, there have questions about whether Mary’s delivery of Christ was: A) painless, and B) left her physical virginity intact.

Some have felt that it somehow undermines the humanity of Christ to assert these Catholic beliefs. We must recall that Christ walked on water, was transfigured on Mount Tabor, exited the sepulcher before it was opened, and walked through locked doors. None of these facts undermine the humanity of Christ. Consequently, to believe that Christ exited the womb of the Blessed Mother in a mysterious way is neither credulous or impious. Rather, it is the conviction of the holiest and brightest saints of the Catholic Church. For anyone who would deny the painless and intact nativity of Christ, let us challenge you to produce a citation from any saint or pope who teaches otherwise – that is a text that affirms that the nativity of the Christ Child caused pain to Mary and broke her physical virginity.

After a little research I discovered that of the 33 Doctors of the Church, none deny the painless and intact nativity of Christ. Moreover, at least 20 of the Doctors of the Church explicitly affirm that the birth of Christ was painless and miraculously left Mary’s physical virginity intact. Again, it all goes back to Isaiah 66:7: “before her pain came, she was delivered of a man child.” This prophecy refers to Christ plain and simple.

I have assembled the most important texts from the Sacred Scriptures, Fathers, Doctors, Councils, and Popes below.


To see how certain Saints use this passages below in their theology, continue to scroll down.


“Therefore the Lord himself shall give you a sign: Behold, a virgin shall conceive and bear a son, and shall call his name Emmanuel” (Isa 7:14).

“Before she travailed, she brought forth; before her pain came, she was delivered of a man child” (Isa 66:7)

Isa 66 is a slam dunk. It explicitly and literally says “before her pain came she was delivered.”

“Then he brought me back the way of the gate of the outward sanctuary which looketh toward the east; and it was shut. Then said the LORD unto me; This gate shall be shut, it shall not be opened, and no man shall enter in by it; because the LORD, the God of Israel, hath entered in by it, therefore it shall be shut” (Ezk 44:1-3).

This passage shows that the womb of Mary is shut and closed even though God comes in and out.

“A garden inclosed is my sister, my spouse; a spring shut up, a fountain sealed” (Canticles 4:12)

The Doctors of the Church interpreted this to mean that the womb of the Virgin Mary is “shut” and “sealed” by God, not to be “opened” in natural childbirth.

The Fathers, Doctors and Popes on Mary’s Painless Delivery of Christ

St Gregory of Nyssa
“Though coming in the form of man, yet not in every thing is He subject to the laws of man’s nature; for while His being born of a woman tells of human nature; virginity becoming capable of childbirth betokens something above man. Of Him then His mother’s burden was light, the birth immaculate, the delivery without pain, the nativity without defilement, neither beginning from wanton desire, nor brought to pass with sorrow. For as she who by her guilt engrafted death into our nature, was condemned to bring forth in trouble, it was meet that she who brought life into the world should accomplish her delivery with joy.” (St Gregory of Nyssa, Homily on the Nativity, AD ca. 388)

St. Ambrose of Milan
“Who is this gate (Ezekiel 44:1-4, see above), if not Mary? Is it not closed because she is a virgin? Mary is the gate through which Christ entered this world, when He was brought forth in the virginal birth and the manner of His birth did not break the seals of virginity…There is a gate of the womb, although it is not always closed; indeed only one was able to remain closed, that through which the One born of the Virgin came forth without the loss of genital intactness” (St. Ambrose of Milan, The Consecration of a Virgin and the Perpetual Virginity of Mary, 8:52; ca. AD 391).

St Augustine of Hippo
“It is not right that He who came to heal corruption should by His advent violate integrity” (St. Augustine, Sermon 189:2).

“In conceiving thou wast all pure, in giving birth thou wast without pain” (St. Augustine, Sermon on Nativity).

“Christ transcends, indeed, the miracles of all besides, in being born of a virgin, and in possessing alone the power, both in His conception and birth, to preserve inviolate the integrity of His mother: but that was done neither before their eyes nor in them. For the knowledge of the truth of such a miracle was reached by the apostles, not through any onlooking that they had in common with others, but in the course of their separate discipleship.” (St. Augustine, Tractate 91:3).

Pope St Leo the Great
“She brought Him forth without the loss of virginity even as she conceived Him without its loss.” (Pope St. Leo the Great, Tome to Flavian, ca. AD 430)

Pope Pelagius I
“Jesus Christ, true God and the same true man proceeded, that is, was born, while his mother’s virginity remained intact: for the Virgin remained such in bearing him just as she had in conceiving him” (Pope Pelagius I, Letter to King Childebert I)

Lateran Council (649 AD) with Pope St. Martin I
“If anyone does not in accord with the Holy Fathers acknowledge the holy and ever virgin and immaculate Mary was really and truly the Mother of God, inasmuch as she, in the fullness of time, and without seed, conceived by the Holy Spirit, God in the Word Himself, who before all time was born of God the Father, and without loss of integrity brought Him forth, and after His birth preserved her virginity inviolate, let him be condemned.“

Council of Toledo XVI (693 AD)
“And as the Virgin acquired the modesty of virginity before conception, so also she experienced no loss of her integrity; for she conceived a virgin, gave birth a virgin, and after birth retained the uninterrupted modesty of an intact virgin.”

St. John Damascene
How can death claim as its prey this truly blessed one, who listened to God’s word in humility, and was filled with the Spirit, conceiving the Father’s gift through the archangel, bearing without concupiscence or the co-operation of man the Person of the Divine Word, who fills all things, bringing Him forth without the pains of childbirth, being wholly united to God?… It was fitting that the body of her, who preserved her virginity intact in childbirth, should be kept from corruption even after death. She who nursed her Creator as an infant at her breast, had a right to be in the divine tabernacles…. It was fitting that she who saw her Son die on the cross, and received in her heart the sword of pain which she had not felt in childbirth, should gaze upon Him seated next to the Father. (St. John Damascene, Second Homily on the Dormition of the Mother of God)

So far as He was born of woman, His birth was in accordance with the laws of parturition, while so far as He had no father, His birth was above the nature of generation: and in that it was at the usual time (for He was born on the completion of the ninth month when the tenth was just beginning), His birth was in accordance with the laws of parturition, while in that it was painless it was above the laws of generation. For, as pleasure did not precede it, pain did not follow it, according to the prophet who says, Before she travailed, she brought forth, and again, before her pain came she was delivered of a man-child (Isaiah 66:7). The Son of God incarnate, therefore, was born of her, not a divinely-inspired man but God incarnate…But just as He who was conceived kept her who conceived still virgin, in like manner also He who was born preserved her virginity intact, only passing through her and keeping her closed (Ezekiel 44:2). (St. John Damascene, On the Orthodox Faith, IV, 14)

St. Thomas Aquinas, Common Doctor of the Church
The pains of childbirth are caused by the infant opening the passage from the womb. Now it has been said above (28, 2, Replies to objections), that Christ came forth from the closed womb of His Mother, and, consequently, without opening the passage. Consequently there was no pain in that birth, as neither was there any corruption; on the contrary, there was much joy therein for that God-Man “was born into the world,” according to Isaiah 35:1-2: “Like the lily, it shall bud forth and blossom, and shall rejoice with joy and praise” (St Thomas Aquinas, ST III, q. 35, a. 6).

St. Bonaventure, Seraphic Doctor of the Church
“O God, my God: I will glorify thee by Thy Mother. For she hath conceived thee in virginity: and without travail she hath brought Thee forth” (St Bonaventure, Psalter of the BVM, 62).

Roman Catechism of the Council of Trent of 1566
“To Eve it was said: ‘In pain you shall bring forth children’ (Gen. 3:16). Mary was exempt from this law, for preserving her virginal integrity inviolate, she brought forth Jesus the Son of God, without experiencing, as we have already said, any sense of pain.” (Roman Catechism, “The Creed” Article III)

If anyone knows any other helpful passages from the saints, popes, and councils, please leave them in the comments below. I’ll add them to the list.