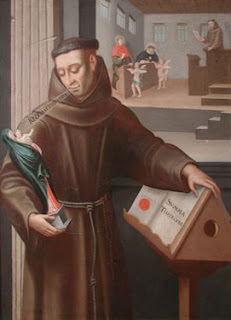 Scotus turning away from Aquinas’ Summa
and toward the Immaculate (gasp!)

People may throw rotten tomatoes at me for this, but I’m going to say it any way: “Blessed John Duns Scotus should be declared a Saint and Doctor of the Church!” I’m a trained Thomist, so I don’t say this lightly: Scotus is a genius when it comes to Christology and Mariology.

All the great defenders of Catholic dogmas are both saints and doctors of the Church:

But where’s the love for Scotus? John Duns Scotus manfully defended the doctrine of Mary’s Immaculate Conception…but he is not honored as either a saint or a doctor…
The reason for this is that he causes theological embarrassment for some Catholics. In the theological scheme of things, Scotus contradicted St Anselm, St Bernard, St Thomas Aquinas, St Bonaventure – just to name a few – on the subject of Mary’s salvation. Each of these holy and venerable doctors of the Catholic Church explicitly taught that Mary had original sin, but that God immediately made her immaculate after she was conceived. They agree that Mary never sinned and that she was rendered immaculate in the womb of her mother St Anne. However, they are dreadfully incorrect in positing original sin to Mary in the first moment of her conception. In other words, they generally teach that Mary was conceived in original sin, and then that a moment later she was made immaculate and free from original sin.
The difficulty centers on the Church’s universal teaching that Mary was “saved” as she herself states in Luke 1:46-47:

“And Mary said: My soul doth magnify the Lord. And my spirit hath rejoiced in God my Saviour.”

Previous theologians (e.g. Bernard, Thomas, Bonaventure) concluded that “salvation” required a “saving from a state of sin.” Thus, brilliant minds like Bernard and Thomas Aquinas believed that Mary had original sin for just a moment so that she could be “saved” from it.

John Duns Scotus, inspired by the Holy Spirit and cognizant that Our Lady was being dishonored, taught that salvation could entail “preservation from sin.” In other words, since humanity was collectively in original sin, God could intervene by saving Mary in a preservative way. God put out His hand and prevented inherited stain (more correctly, the lack of sanctifying grace) from extending to Mary.

Whereas most humans are born in the grime pit of sin, in the case of Mary, God reached out and prevented her from falling into this grime pit at the very moment of conception. He saved her by not allowing original sin to touch her. He created her fully righteous and full of grace. She was fully justified and sanctified at the first moment of conception.

For example, you can save a child from a car wreck in two ways: 1) Call 911 and have the medics to perform CPR and other measures to save the child’s life OR 2) jump out into the street and push the child away from the oncoming car.

In this way, Mary was “saved” and “without sin.” Scotus solves the difficulty. He formulates what the Church of Rome has always taught and believed.

In fact, we might even say that Christ is Mary’s Savior more than the rest of us, because He saved her so absolutely and perfectly. More grace went into saving her than anyone else because she is the Immaculate Conception.

So John Duns Scotus is absolutely brilliant. What Bernard, Thomas, and Bonaventure couldn’t see, Scotus did see. This reveals that Scotus had an intimate love for Christ and that his soul was quiet enough to perceive the mysteries of God.

Tradition also states that Mary once appeared to Scotus on Christmas and allowed him to hold the Christ Child for a moment. This further confirms that Scotus was a great mystic and saint. Recall that Scotus was persecuted in his era even called a heretic. Yet he persevered in his conviction that Mary was without blot. He was also a great lover of poverty and the poor.

The feat of the Immaculate Conception is the great vindication of Scotus. Let us pray to him. Our Lady loves him so much. He stood up for her when other great saints could not.

Blessed John Duns Scotus, pray for us to she who is without stain.

PS: I like to think of Thomas Aquinas waiting for Scotus at the pearly gates. When Scotus enters, Thomas gives him the fraternal kiss of peace and says, “Thank you kind friar. You corrected my mistake. I have been praying from Heaven for someone to do so.”
PPS: I’m now bracing myself for all my brother Thomists who will attempt to show that Scotus wasn’t so special after all.

Categories: Mary, Thomas Aquinas
Disclosure of Material Connection: Some of the links in the post above are “affiliate links.” This means if you click on the link and purchase the item, I will receive an affiliate commission. Regardless, I only recommend products or services I use personally and believe will add value to my readers. I am disclosing this in accordance with the Federal Trade Commission’s 16 CFR, Part 255: “Guides Concerning the Use of Endorsements and Testimonials in Advertising.”