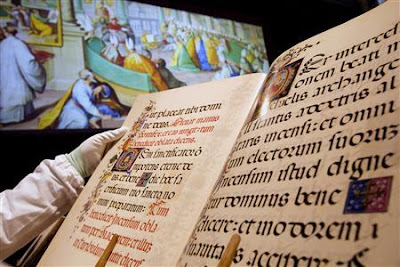 Bibliophiles, this is the event for you. Original texts from Erasmus, Voltaire and Galileo, an exquisite 15th Century edition of Dante’s “Divine Comedy,” illustrated by none other than famed Florentine Renaissance artist Sandro Botticelli, they are just a small portion of the works on display as part of a new exhibition featuring some of the Vatican Library’s most precious works.

The exhibition, “Conoscere la Biblioteca Vaticana: una storia aperta al futuro” (“Getting to Know the Vatican Library: an Open Story to the Future”), marks the first time in the library’s 550-year history that a portion will be open to the public. Previously, only accredited scholars could see these works up close. Now, thanks to curators at Biblioteca Apostolica Vaticana and Opera Romana Pellegrinaggi, some of the world’s most important texts will be open to public viewings, but only until January 31, 2011. As Vatican Radio says of this historic event, “It’s not open to just anyone, so if you want to have an idea what the Vatican Library looks like and what it contains, you now have until January 31st to see an exhibit that opens the doors – virtually – of the Pope’s very own Library to the general public.

The exhibition, which will be translated in five languages, runs through the end of January. Those traveling to Rome over the next three months can book their place online. (More details on how just below).

Vatican Library officials acknowledge this exhibit marks a unique opportunity to open the doors to the public. Cardinal Raffaele Farina, the Librarian for the Vatican Library and Archivist of the Vatican Secret Archives, says they would like to make this a permanent exhibition, but the costs involved and the risk of damage for these priceless books and manuscripts make that a very diffcult proposition. “We have to be very careful about these ancient texts,” he says.

If any of readers/followers of Canterbury Tales are headed to Rome between Nov. 11 and Jan. 31, 2011, they can book their place in this wondrous place of higher learning.

PS: If anyone wants to fly me out to Rome to be your personal tour guide (wink, wink) – just let me know!!!