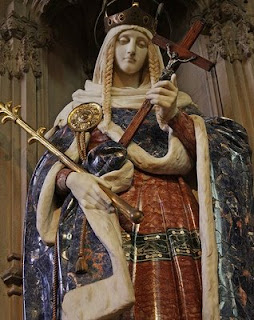 Saint Margaret was ethnically English, the daughter prince Edward the Exiled. Her father was called “Exiled” because he had been exiled from his homeland and resided in Hungary, where Margaret was raised and educated. During this era, the King Andrew of Hungary was a fierce defender of Catholicism and the prerogatives of the Pope. Consequently, Margaret received an excellent Catholic education and learned to reverence the Church.

Margaret’s family eventually returned to England, but William the Conqueror stormed the nation. While fleeing England for the continent, a storm rerouted the family’s ship to Scotland where they fled to the protection of King Malcolm III of Scotland.

Malcolm III was a widower and interested in marrying into the royal blood of England. He and Margaret were soon united in wedlock and the alliance was forged. This entailed that the Scots were now united with the old royal line of England.

Margaret bore eight children for the king: six sons and two daughters. One of the sons became a monk and later an abbot.

St Margaret gave herself to charitable works, and personally served orphans and the poor every day before she ate her meals. She rose at midnight to pray in the church every night. She also influenced her husband and children to be righteous and holy rulers, submitted to Christ and His Holy Church.

Margaret died in 1093 after learning of the deaths of her husband and eldest son Edward in battle. Her relics are in Dunfermline Abbey.

In the old calendar, her feast day is June 10.

St Margaret, patron of pious mothers, pray for us!