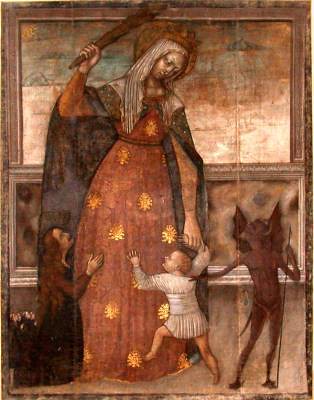 Image above: Mary, Exterminatrix of Heresy.

Note how the Blessed Mother is beating down a demon with a club and protecting a little one from his poisonous lies. This imagery derives from the book of Revelation:

15﻿ The serpent poured water like a river out of his mouth after the woman, to sweep her away with the flood. ﻿
16﻿ But the earth came to the help of the woman, and the earth opened its mouth and swallowed the river which the dragon had poured from his mouth. ﻿
17﻿ Then the dragon was angry with the woman, and went off to make war on the rest of her offspring, on those who keep the commandments of God and bear testimony to Jesus. And he stood on the sand of the sea (Rev 12:15-17).

Here the Serpent [i.e Satan] spews out water from his mouth in order to overcome the blessed Virgin Mary. His lies are described as a “flood.” This is the tactic that the Devil tried with Eve. He spewed forth lies and he vanquished the first woman.

He tried the same strategy with the Blessed Mother of Christ but was not successful – she was perfectly graced by Christ. Angry, he then turns his attention to “the rest of her offspring, on those who keep the commandments of God and bear testimony to Jesus.”

We are those who try to “keep the commands of God and bear testimony to Jesus Christ.” Satan is trying to damn us through the lies he spews from his mouth. Once baptized, he tries to catch us through heresy. Yet, Mary’s maternal protection stays with us. Consequently, she is called the Exterminatrix of Heresy because she stands in enmity against Satan (see Gen 3:15 for details).

If you’ve ever seen a mama bear protect her cubs, you know how ferociously our Immaculate Mother fights for us! She’s got a club in her hands and she is fighting for us…