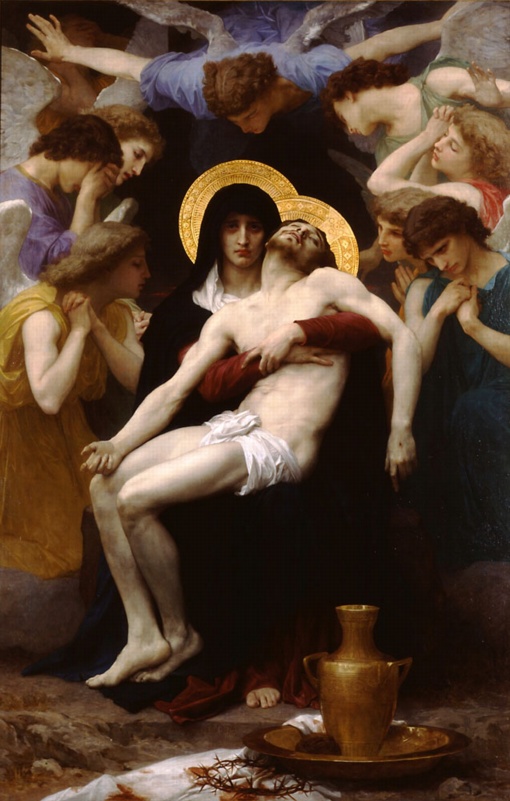 We now turn the doctrine that Mary is Coredemptrix. This doctrine is greatly misunderstood and often leads to ecumenical fisticuffs. However, if properly defined, we find that it is both true and beautiful.
Let me begin with two verses from Saint Paul in order to defuse the ire of fierce objectors:

In both passages, Saint Paul uses σώσω, meaning “I save.” Now did Paul die on the cross and rise again for the justification of sinners? Of course not. Neither did the Blessed Virgin Mary make absolute propitiation for humanity. Christ can say σώσω or “I save” in the absolute sense. Paul and others can say σώσω or “I save” only in a relative sense.
[Incidentally, the distinction between “absolute” and “relative” is essential to the Catholic doctrine of prayer and mediation. Christ is the absolute mediator between God and mankind since His both fully divine and fully human. However, all baptized humans are relative intercessors in that we can pray for one another by participating the mediation of Christ. His mediation is absolute. Our mediation and that of the saints is relative to His.]
This distinction between redemption absolutely (Christ alone) and redemption relatively (all those who participate in the proclamation of the Gospel) is key to understanding the Blessed Mother’s title as Coredemptrix. The prefix “co-” here denotes relative causality. This is why Saint Paul says, “We are God’s co-workers” (1 Cor. 3:9). Paul’s labor in the work of salvation is relative (not absolute), and hence he is a “co-worker with God.” Yet Mary’s role in the incarnation and her presence at the crucifixion reveals that she is principally involved in this “relative causality of salvation” as understood by Saint Paul. Mary is a “co-worker with God” in a preeminent way. God is the Father of Christ. She is His mother.
Mary’s relative causality with respect to human salvation was taught as early as the second century by Saint Irenaeus who wrote:

“In the same way, Mary, betrothed to a man but nevertheless still a virgin, being obedient, was made the cause of salvation for herself and for the whole human race…Thus, the knot of Eve’s disobedience was loosed by the obedience of Mary. What the virgin Eve had bound in unbelief, the Virgin Mary loosed through faith.”
Saint Irenaeus of Lyons, Against Heresies 3, 22.

Here Mary is called “the cause of salvation” – but clearly St Irenaeus does not mean that Mary is the absolute cause of our salvation since that privilege belongs to Christ who is fully divine and fully human. Instead, Mary is the divinely chosen vessel of salvation. She, above all others, participates in the redemptive work of Christ. This is why Catholics can say, with Saint Irenaeus, that Mary is the “cause of our salvation” without crossing our fingers or winking.
Popes on Co-Redemptrix
Pope St. Pius X used the term “Coredemptrix” three times:
Pope Pius XI used the term five times on three separate occasions:
Pope John Paul II has also employed “Coredemptrix” on three separate occasions:
Please leave a comment and share your thoughts with us.
Please also read:
Comment | Share | Tweet | Buffer | print | email