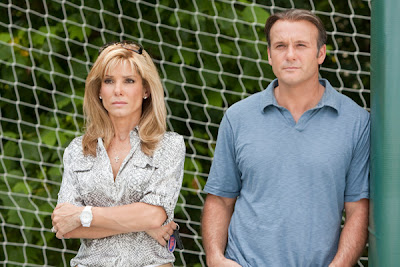 Last weekend my wife and I saw a great movie: The Blindside. We loved it. I laughed. I cried. For once, I got my money out of a movie ticket.

Without spoiling the film for those who haven’t seen it, it’s about a family who adopts an enormously sized under-privileged teenager who doesn’t have a home. The young man turns out to be Michael Oher, the present left tackle for the Baltimore Ravens. It’s based on a true story and as my father used to say, “truth is better than fiction.” And if you don’t count the lamentable movie Speed, Sandra Bullock, who plays the feisty but philanthropic mother, is one of my favorite actresses. This is her best role. She deserves to win an award for performance.

An article about Sandra Bullock recently caught my eye as it relates to Christianity and popular culture.

Sandra Bullock says thanks to the Tuohys, who attend Grace Evangelical Church in Memphis, she now has “faith in those who say they represent a faith.” Getting to know Leigh Anne Tuohy, says the actress, showed her that religious faith can be authentic. “She was so open and honest and forthright,” Bullock shares, “and I said, wow, I finally met someone who practices but doesn’t preach.”

Bullock admits she was wary of Christians before she met the Tuohys. “Whereas…before I was like, do not give me a lecture on how to live my life when I know I’m a pretty decent human being,” says the actress. “I might not go to church everyday, but I know I do the right thing or try to. You’re going to church and you’re still sleeping around on your wife…how are you better than I am? So I finally met people who walk the walk.”

This impressed me for two reasons. First, I engage with Christians every day and I am deeply aware of the mixture of hypocrisy and heroic sanctity that exists in the Church. Consequently, I’m surprised that some people assume that all Christians are all hypocrites. I’m also amazed that such people are surprised to meet someone who seems to be genuinely faithful.

Secondly, Bullock’s statement reminds me that actions, not words are the most compelling witness that we can set forth to an unbelieving world. Non-Christians see Christ most clearly in our works, not in our words. People want to see Christians who, as Bullock observes, “walk the walk.”

Saint John reminds us of this principle: “Little children, let us not love in word or speech but in action and in truth” (1 John 3:18). Saint Francis is also reported to say, “Preach always, use words only if necessary.”