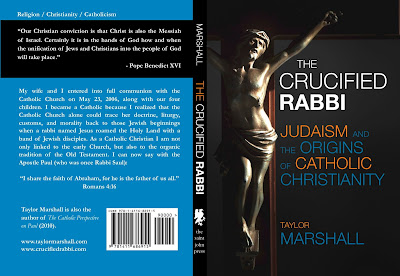 Speaking the Jewish custom for praying for the dead, I have a new book coming out this Fall:

The Crucified Rabbi:
Judaism and the Origins of Catholic Christianity

You may remember the show I did on the Catholic Answers radio show earlier this year on “Whether the pope wears a yarmulke”. This is the final book form that began to come together in 2007.

In the book, I talk a little about my conversion to the Catholic Faith, but also about Messianic prophecy, Davidic typology of the Kingdom of God and how it relates to Catholic ecclesiology. I look at Jewish tevilah washings and the mikvah as they relate to baptism, infant baptism, and baptismal regeneration. The Passover and the Holy Mass. Hebrew notions of priesthood and the New Testament notion of priesthood. There’s even a chapter on “Jewish Vestments, Catholic Vestments” with lots of cool quotes form Philo and Josephus on the symoblism of vestments.

I also look at the Temple architecture as it has related to the traditional architecture of Catholic Cathedrals. Marriage, divorce, and annulments in light of the stipulations of Moses. Jewish Nazirite vows and the Catholic monastic tradition. Jewish feast days and how they relate the Catholic liturgical calendar (and how they relate to Christian eschatology). There’s also a section on saints and praying for the dead. Lastly, I look at Jewish and Catholic tradition regarding the resurrection of the body and the afterlife.

There’s lots of Scripture and lots of rabbinical quotations if you’re in to that sort of thing. It is also explains why Catholics do not participate in “Messianic Judaism” for ecclesiological reasons. 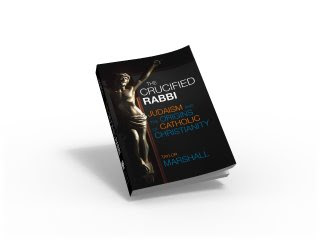 Archbishop Carlo Maria Viganò provides a new commentary on the...
33:46

German Catholic Church, Cardinal Reinhard Marx, 67, the archbishop of...
1/194
Next»