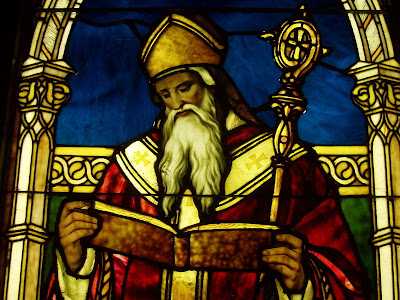 Taylor (or anyone else who can help), Can you either post or send me a quote or quotes from St Augustine wherein he either assumes, affirms, or defends the invocation of saints? Thank you! BTW, after a long journey, I have entered into full communion with the Catholic Church this Easter Vigil. The name you see below is my Confirmation name. Thanks be to God!

Congratulations on being received into full communion with the Holy Catholic Church!

Saint Augustine of Hippo refers to the orthodox practice of praying to saints and martyrs in Sermon 159, 1 where explains:

‘There is an ecclesiastical discipline, as the faithful know, when the names of the martyrs are read aloud in that place at the altar of God, where prayer is not offered for them. Prayer, however, is offered for the dead who are remembered. For it is wrong to pray for a martyr, to whose prayers we ought ourselves be commended.”

Saint Augustine says something similar in his Homilies on St. John’s Gospel 84:

“At the Lord’s table we do not commemorate martyrs in the same way that we do others who rest in peace so as to pray for them, but rather that they may pray for us that we may follow in their footsteps.”

There are two other passages that come to mind, but they don’t explicitly reference invoking saints. Instead, the passages demonstrate how Saint Augustine encouraged and participated in liturgical veneration of the saints:

“A Christian people celebrates together in religious solemnity the memorials of the martyrs, both to encourage their being imitated and so that it can share in their merits and be aided by their prayers.” (Against Faustus 20, 21)

“Neither are the souls of the pious dead separated from the Church which even now is the kingdom of Christ. Otherwise there would be no remembrance of them at the altar of God in the communication of the Body of Christ.” (The City of God 20, 9)

I hope that helps. Welcome to the great assembly of the saints – both in heaven and on earth.

Saint Augustine, pray for us to God!