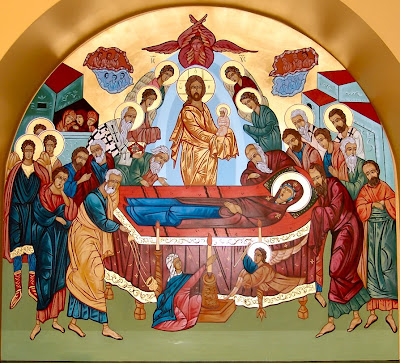 The following passage from Dionysius the Areopagite’s On the Divine Names is traditionally held to be an account of the Dormition (“Falling Asleep”) of the Blessed Virgin Mary. I find it interesting because the event seems to have taken place in a liturgical context.

For even among our inspired Hierarchs, when as thou knowest, we with him [i.e. an Athenian priest named Hierotheos] and many of our holy brethren met together to behold that mortal body [i.e. of Mary], Source of Life that received the Incarnate God, and James the brother of God [i.e. James of Jerusalem] was there, and Peter the chief and highest of the Sacred Writers, and then, having beheld it, all the Hierarchs there present celebrated, according to the power of each, the omnipotent goodness of the Divine weakness [i.e. that God should become man].

On that occasion, I say, he [i.e. Hierotheos] surpassed all the Initiates except for the Divine Writers, yea, he was wholly transported, was wholly outside of himself, and was so moved by a communion with those Mysteries he was celebrating, that all who heard him and saw him and knew him (or rather knew him not) deemed him to be rapt of God and a divine hymnographer.

– Dionysius the Areopagite, On the Divine Names, 3, 2

After those present “beheld it” – “it” apparently being the the mortal body of the Blessed Mother – “all the Hierarchs there present celebrated.” This apparently refers to a liturgical act and given what I know about the rest of the Dionysian corpus, I’m going to guess that he here speaks of the Holy Eucharist.

Incidentally, some have suggested that the context of their gathering was simply to celebrate the Eucharist and that the reference to the “mortal body, Source of Life that received the Incarnate God” actually refers to the Eucharistic species. This interpretation cannot be correct for two reasons:

1. The Holy Eucharist cannot be called “mortal” since It is Christ’s resurrected and impassible body (cf. Summa theologiae III, q. 81, a. 3).

2. The body of Christ did not “receive the Incarnate God”. That would be the error of Valentinius or that of the Adoptionists.

Therefore, it seems that he refers to the Blessed Mother of Christ, because it can only be said of her that she “received the Incarnate God”.

Categories: Church Fathers, Liturgy, Mary
Disclosure of Material Connection: Some of the links in the post above are “affiliate links.” This means if you click on the link and purchase the item, I will receive an affiliate commission. Regardless, I only recommend products or services I use personally and believe will add value to my readers. I am disclosing this in accordance with the Federal Trade Commission’s 16 CFR, Part 255: “Guides Concerning the Use of Endorsements and Testimonials in Advertising.”