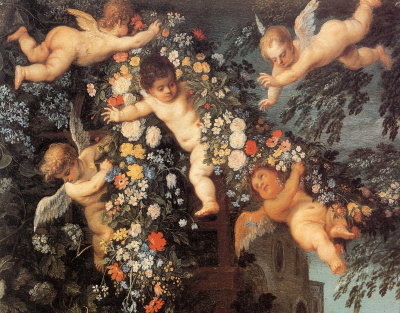 {Continued from Limbo Part I and Limbo Part II. However, you may want to read this post first before reading Parts I and II.}

What happens to unbaptized babies when they die? Here are five theories that are typically proposed to answer this question:

Theory #1: Limbo or the State of Natural Beatitude

This is the position endorsed by the Popes and Doctors of the Catholic Church. Children are conceived in original sin. Original sin is the absence of sanctifying grace in the soul. It is a deprivation of grace. Accordingly, the soul cannot see God. Theologians posited that since unbaptized infants are without personal sin, they can not justly be punished in the fires of Hell. However, since they are without grace, they must exist in a pleasant state of nature. This pleasant state of nature away from the supernatural presence of God was identified with the outer rim of Hell. The Latin word for this out edge or rim being “Limbus“.
Limbo of the Fathers was the place where the Patriarchs of the Old Testament awaited the descent of Christ. It is described as being cool and having water (cf. Luke 16:21-33). Christ emptied Limbo on Holy Saturday when Christ descended and escorted the Old Testament faithful to the beatific vision (“When he ascended on high he led a host of captives” Eph 4:8).
The Limbo of the children is also a realm of natural beatitude in which the souls of infant dwell in perfect natural happiness, yet without the beatific vision of God. These souls receive no torture or pain, but because they lack sanctifying grace they cannot be deified so as to see the vision of God like the saints in Heaven.
Limbo is the majority position in the history of the Catholic Church and bears the approbation of theologians, saints, doctors, and popes.
For example, Saint Thomas Aquinas, Universal Doctor of the Church, defends Limbo of the infants here and here.
Theory #2: Vicarious Baptism by Desire (Cardinal Cajetan)
The Church officially teaches that there is salvation through “baptism by desire”. Accordingly, people preparing for baptism may be saved even though they did not receive the sacrament of baptism before death. If such a person should die before being baptized, they are not excluded from Heaven on a technicality. Instead, they are considered “baptized by desire”.

Obviously, Catholic parents desire for their infant to be baptized. If the infant should die before baptism, one could perceive that the infant received “baptism by desire”. In the case of infant baptism, the infant is baptized through profession of faith by the parents and godparents. Why wouldn’t the child receive “baptism by desire” through the same intention of the parents? The position was once explored by Thomas Cardinal Cajetan (1469-1534). However, Pope Saint Pius V condemned the position and had this passaged removed from Cajetan’s works!
Note especially that this theory of vicarious baptism of desire only applies to the infants of Christians, and not to all infants without exception. In order order to apply it to all infants, one would have to adopt the third theory…
Theory #3: Blessed Mary as Mother and Sponsor of Infants
Similar to the view above except that Mary serves as the adoptive mother, guardian, sponsor, and godparent of every conceived infant in virtue of her status as “Mother of Christ” and “New Eve”. As a human person and a human mother, she adopts all conceived children, wanted or unwanted. She desires the baptism of each and so each infant receives a baptism by desire. As Spouse of the Holy Spirit, her role as a human parent extends to the initiating sacrament of the Holy Spirit, that is to say, Holy Baptism.
Unfortunately, this theory is extremely speculative and assumes that vicarious baptism by desire is, in fact, possible. The Catholic Church has historically been suspicious of vicarious baptism by desire.
Theory #4: Baptism by Blood (hypothetically, in the case of abortion and infanticide)
The Catholic Church also teaches that unbaptized martyrs will be saved through “baptism by blood”. In this case, a person is martyred for their Christian profession before the victim has received baptism.
Some, wrongly wish to apply baptism of blood to aborted infants. The idea is this: Satan hates infants because he was conquered by God becoming and infant in the womb of the Blessed Virgin Mary. Thus, Satan seeks to destroy all infants.
Just as the Holy Innocents were murdered by Herod in Bethlehem at the time of Christ’s birth, so all aborted babies die for the cause of Christ. On account of this, they are accounted as martyrs just as the Catholic Church reckons the Holy Innocents of Bethlehem as martyrs.

This theory cannot be the case since aborted babies did not die for the sake of Christ. If being murdered amounts to martyrdom, then technically any murdered person is also a martyr. Yet this is false.

This theory is not Catholic and must be rejected, because “martyrdom” is defined as a murder for the sake of Christ or for the Catholic Faith. Yet this theory implies that every crime of violence is a crime in hatred of Christ and/or the Catholic Faith, which is not the case. It also implies that abortion mills are places of great grace since the town’s local abortion mill is a open gateway to Heaven. Worst of all, it implies that abortionists send more souls to Heaven than does the local Catholic priest who stands at the baptismal font.
Theory #5: “God-works-in-mysterious-ways-and-He-is-merciful” Theory
This theory states that God redeems all unbaptized infants without exception simply because He is merciful. God is the God of the orphan and widow. Since dead infants are in a sense orphans, they receive a special act of grace and are regenerated by Holy Spirit. God’s desire to save all men entails that He extends the grace of new birth to those who are unable to make a decision on their own part.
This theory is rather weak and appeals to sentimentalism. It also ignores the teaching of Christ in John 3:3-5 where our Lord teaches that the sacrament of baptism is absolutely necessary.
Conclusion
In conclusion, the theory of Limbo is the strongest when we weigh the the scriptural, historical, and sacramental evidence. That unbaptized infants go to a state of pure natural beatitude (limbus) is the position held by:

These are the greatest intellects of the Catholic Church, so we might consider showing a humble deference to them.