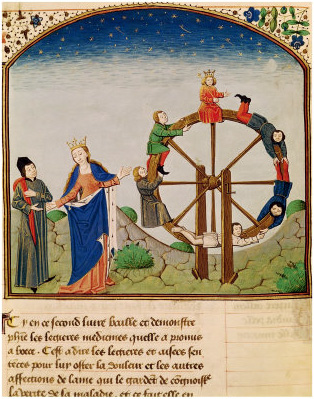 Lady Philosophy instructing Boethius
about the so-called “Wheal of Fortune”
I just recently finished a course at the University of Dallas translating portions of Cicero’s De officiis. The subject led me to think more about how the Catholic Church had appropriated pre-Christian philosophy. So I started reading Boethius‘ The Consolation of Philosophy, which often references Cicero’s works. This text is interesting because although Boethius was a Catholic and wrote numerous treatises in defense of the doctrine of Trinity and other such things, his Consolation of Philosophy contains no mention of Christ, despite it being his last words before being executed for trumped up charges of political treason. However, it does seem to echo Jewish wisdom literature in which the personified Lady Wisdom instructs man about avoiding vice and seeking virtue.

When I first began reading the Consolation, I was a bit put off. It begins with Boethius lamenting his poor estate in prison, when suddenly a beautiful woman appears to him — Lady Philosophy. She begins a Socratic dialogs with him, demonstrating that “fate” cannot be governed by man. Lady Fate raises men to riches, power, and health only then to take these blessings away. Thus, a man cannot depend on fate to find happiness. Happiness cannot be found in any such thing that can be taken away. Otherwise, happiness is imperfect.

The tone changes in Book III. Lady Philosophy proves that happiness cannot be found in riches, power, honors, offices, etc. Instead, happiness can only be found in that which is perfect and self-sufficient, that is to say, God Himself. Then Lady Philosophy explains that one must pray and launches into a beautiful prayer about the creation of the Universe. This creation motif is contrary to Aristotle and similar to Plato’s Timaeus. Most of all it, it is a Judeo-Christian account of creation ex nihilo. Scholars have found that some of the prayer is taken from Proclus’ commentary on Plato’s Timaeus, but there are some Scriptural echoes in it, even a phrase from 1 Corinthians that the editors missed.

I find this interesting because Dionysius the Areopagite also depends on Proclus in his own theology. Dionysius and Boethius are roughly contemporaries and both attempt to yoke the Philosophical tradition (via Proclus) to the Christian tradition. Dionysius does it through mystical/liturgical theology. Boethius does it through discursive philosophical dialog. In their era, the Church had become resistant to the venom of Gnosticism, so that Greek philosophy could then be appreciated — so long that it did not compromise the revealed truths of Christ. In other words, we have the budding of scholasticism. This is why Boethius is called “last of the Romans, first of the Scholastics”.

Speaking of Boethius‘ The Consolation of Philosophy, C.S. Lewis wrote:

“To acquire a taste for it is almost to become naturalised in the Middle Ages.”

— C. S. Lewis, The Discarded Image : An Introduction to Medieval and Renaissance Literature (1964) 75.