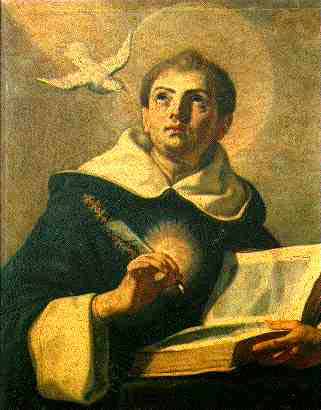 I teach twelfth grade Moral Theology and our class recently spun out of control with a Thomist/Molinist debate on the issue of predestination and efficiency of grace. I recently read this from Romanus Cessario’s A Short History of Thomism.

The theological claims of the Protestant Reformers, especially the unbending views of John Calvin, made such questions almost inevitable ones for Catholic theologians to face, but the results were not always satisfying. The Jesuits in fact argued that the Dominican position was indistinguishable from that of Calvin, whereas the Dominicans resorted that the Jesuits had reintroduced Pelagianism into the Christian life. Even after years of patience debate and commission work, no authoritative declarations were delivered by the Holy See, which instead preferred to counsel forbearance to both parties.[1]

The Dominican (i.e. the Thomist) doctrine of predestination is not identical to that of Calvin. It differs in its anthropology; however, there are similarities. In both views, divine predestination to eternal life is ante proevisa merita. The Calvinist would call this “unconditional election”. In other words, God does not predestine anyone to salvation because he “previews” how they will act when given the chance to receive divine grace. The Jesuits (and especially Luis de Molina, S.J.) posited that predestination was based on God’s choice post proevisa merita – that is to say, after God “previews” how a certain perrson would respond to grace.

The Dominicans (Thomists) accused the Jesuits (basically Molinists) of Pelagianism because the Dominicans understood the Jesuits to be teaching that God only gives the grace of salvation to those whom God deems worthy. In other words, grace is “earned” by the predestinate because God foresaw them as being worthy of salvation. In other words, grace wasn’t freely given.

On the other hand, the Jesuits accused the Dominicans of “Calvinism” and presented the Dominicans as teaching that God arbitrarily chooses some to salvation and passes over others. This hardly seems fair or just. I should add here for the sake of clarity that he theory of the negative damnation of the reprobate (sometimes associated with Calvin, but not necessarily) is repudiated by St. Thomas and the Catholic Church.

The Holy See did the prudent thing. They made no official pronouncement on the matter. However, it is safe to say that the current majority position of the Catholic Church today is something that approximates Molinism – that “predestination” should only be understood as based on God’s knowledge of future contingencies.

I’d be interested to hear the opinions of fellow Catholics on this issue. I’d especially like to hear from Catholic converts from Calvinism as to how they now understand predestination in light of the Catholic faith.