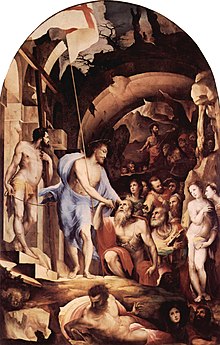 I’m studying the recent document The Hope of Salvation for Infants Who Die Without Being Baptized by the International Theological Commission (an advisory body that carries zero theological weight or magisterial authority). The death of unbaptized infants has always been difficult point in Catholic theology. God wants all to be saved (including infants). Baptism is the ordinary means of grace for salvation. If infants die without baptism, they are guilty of neither personal sins nor for resisting baptism. Yet they still have original sin. So where do they end up?

Subtle theologians recalled the Limbus Patrum or “the limbo of the Fathers” of the Old Covenant. It was believed that there was an edge or fringe (Latin: limbus) that did not include the fiery torments of hell or gehenna. It was here in the “pleasant place” of hell/sheol/hades that the Old Covenant faithful waited until Christ “descended into hell.” It is the place of natural beatitude, yet without the beatific vision of God.

This pleasant “edge of hell” is called limbo or “Abraham’s bosom” in Sacred Scripture (cf. Lk 16:22). This division of the abodes of the netherworld is attested to by the likes of Saint Thomas Aquinas and goes back to Jewish sources. For example, the Jewish Book of Enoch (a non-canonical, non-inspired book) describes Sheol (the underworld) as divided into four sections:

Similarly, Saint Thomas Aquinas teaches that there are four abodes in the netherworld:

According to Catholic teaching, when Christ descended into Hell (the section called Limbus), He applied the merits of His death to the souls of the Old Covenant faithful and brought them to Heaven.

This vacated Limbus Patrum was the perfect place to assign unbaptized infants. This “limbo” was not heaven, but it was also not the fires of hell. Subsequently, theologians distinguished the limbo of the Fathers from the limbo of the infants.

It was a suitable solution to a difficult problem: unbaptized babies went to limbo where they lived in natural bliss apart from the supernatural life necessary to dwell in the beatitude of God’s presence. So limbo has all the features of heaven (paradise, bless, perfect natural happiness), yet without the vision of God.

The reasons for the recent study The Hope of Salvation for Infants Who Die Without Being Baptized (again, a document without magisterial authority) are given at the beginning of the document:

2. In these times the number of infants who die unbaptized is growing greatly. This is partly because of parents influenced by cultural relativism and religious pluralism who are nonpracticing, but it is also partly a consequence of in vitro fertilization and abortion. Given these developments, the question of the destiny of such infants is raised with new urgency.

In such a situation the ways by which salvation may be achieved appear ever more complex and problematic. The church, faithful guardian of the way of salvation, knows that salvation can be achieved only in Christ, by the Holy Spirit. Yet as mother and teacher, she cannot fail to reflect on the destiny of all human beings, created in the image of God,2 and especially of the weakest.