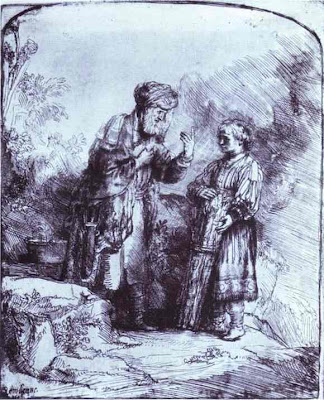 With all the recent discussion on this blog concerning justification, I wanted to post something on the various “justifications” of Abraham, our father in faith.

By reading the Epistle to the Romans, the Epistle to the Hebrews, and the Epistle of St. James, we discover that Abraham was “justified” at least three times (Gen 12, Gen 15, Gen 22). This demonstrates that while justification occurs as an initial event, it continues in a progressive manner.

The First Justification of Abraham
Hebrews 11:8 refers to the virtue of Abraham’s faith when he left his homeland. Hebrew’s says that this faith is an example of the faith that “pleases God”. Moreover, Hebrews 11:10 states that Abraham’s faith in Genesis 12 was based on Abraham’s belief that he would receive a “city without foundations and whose architect and builder was God.” Abraham became a believer at this point and thus was justified.

The Second Justification of Abraham
The second justification is the one that St. Paul focuses on in his discussion of Genesis 15. St. Paul in Romans chapter 4 makes his defense of the righteousness that comes from God through faith based on the Abraham’s faith in the promise of God. Here Abraham believes and is justified.

Was not Abraham our father justified by works, when he offered his son Isaac upon the altar? You see that faith was active along with his works, and faith was completed by works, and the scripture was fulfilled which says, “Abraham believed God, and it was reckoned to him as righteousness”; and he was called the friend of God. You see that a man is justified by works and not by faith alone. (James 2:21-24)

in this justice, received through the grace of Christ ‘faith cooperating with good works’, they increase and are further justified, as it is written: ‘He that is just, let him be justified still,’ (Rev 22:11) and again: ‘Be not afraid to be justified even to death,’ (Sirach 18:22) and again: ‘You see, that by works a man is justified and not by faith alone.’ (James 2:24)
– Council of Trent, Session 6, Chapter 10